VMA 1.87 : Renounce the affections of the sense enjoyers 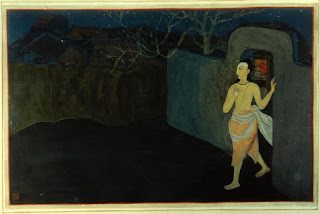 I am on my way to Vrindavan after two months in Gauda Mandal Bhumi. Currently in Kolkata waiting for my train. Liminal is the word that best describes my "in-between" state of mind. There is something about the interplay of Gaura and Krishna lila that is unique to our sampradaya, another of those mysteries that life and bhajan are full of. I see that this post was originally made exactly a year ago day before yesterday.

Alas, my own family and friends all want to kill me
by binding me in the ropes of affection,
all of which are completely false.

Their intelligence has been stolen by illusion,
and they speak almost like madmen.

They take the seeds of unwanted sufferings
as their true self-interest,
thinking themselves fulfilled by them,
and refuse to listen to those who tell them
where true happiness lies.

O abode of Vrindavan!
When will I flee this inauspicious society
and take shelter of you?


Vrindavan, in Prabodhananda Saraswati's view, is an abode of renunciation. Why would those coming to live in the Dham come here with the same mentality that pervades the world of materialistic thinkers?

Nowadays, governments and human societies only think of economic development and improving people's standard of living, thinking that this is the clue to salvation and human happiness.

Bhagavad-gītā says that material pleasures, those born of contact with the sense objects, including those in the mind, have a beginning and an end and thus simply perpetuate the cycle of madness, the unending chase after illusory pleasures.

The pleasures that derive from contact with
sense objects are the wombs of misery.
They have both a beginning and an end
and thus the wise take no delight in them.
(Gita 5.22]

Indeed, the so-called advancement of human society has basically been to plant more and more of these seeds of dissatisfaction. Every advancement of civilization increases the anxiety level. The more one has, the more one wants. The ocean is constantly being filled, but never fills up.

The more people have and possess, the more they want. Those sections of society that are less well-off see the wealth and sense-pleasures of the fortunate characters in television programs and wonder why they cannot have the same. And so they set off working hard, indeed slaving for little remuneration following the carrots of ever newer toys and distractions, which will provide them a sufficient temporary respite from their toil only to have them come back for more. And when this tension builds and the sheer impossibility of the quest becomes too burdensome, they revolt.

It seems that such developments are unstoppable. They are the symptoms of the Kali-yuga, which Shaunaka Rishi complains about to Suta Goswami at the beginning of the Bhāgavatam. This is what we have to face in the current age:

The people of this age of Kali do not live very long lives, O revered one. They are less intelligent, have a very wrong picture of what life is meant for; they are unfortunate and so, for all these reasons, are constantly disturbed. (SB 1.1.10)

This is why bhakti-yoga is the dharma for the age. Bhakti is about taking everything and dovetailing it into God's service. It is about seeing everything for its utility in achieving God-conscious community. For nearly everyone, that is an "as best as I can" proposition. In other words, it is easier said than done and always imperfect. But that is the whole point behind any kind of sādhanā: you set a goal and you do whatever is necessary to achieve that goal, learning as you go and not giving up despite the imperfections.

We are all somehow trying to find a purpose in life and, if we are fortunate, we have a strong dream or ideal that orients our efforts. But such ideals nearly always become confused by the conflict between ethics and the perceived realities of material life. Ethics rarely win out in this equation. This results in a fundamental dishonesty with oneself (kaitava) that is the very definition of the conditioned state.

So, for most people, the idea of taking everything and dovetailing it in God's service is bound to fail. It is impossible to achieve without some guidance from those with a little more experience in the matter.

That is why there are so many systems of self-knowledge and self-realization, with so many gurus and so many guides and teachers, each hawking their own wares as they line both sides of your path to enlightenment.

It is certain that when one chooses a guru, one chooses his or her primary path. It should be accepted as Destiny and followed until its benefits and limitations have been properly assessed. We must only recognize that as long as we are headed in the opposite direction from materialism, we are all colleagues.

Even so, the current fad of religious and spiritual dilettantism is not to be encouraged. No specific path should be diluted due to the whims of those who seek fame, fortune and followers. Indeed, the purpose of following a specific path is to distill it to its essence, which is discovered by persistent sādhanā. It should be completely entered into in samādhi. It is a life of pure being.

Without perfecting the internal life of bhakti, level by level, the attempt at achieving meaningful intercourse with the outer world is simply another spit in the wind.

Without dedication to a specific path, there can be no renunciation. Renunciation on its own, on the basis of ethical rules, is always subject to temptation. Transformation by the sādhanā of samādhi in Braja-lilā-rasa results in the impossibility of succumbing to anything that is not bhakti.

Nevertheless, Prabodhananda is still telling those who have not reached the stage of ruci, that it is better to attempt this sādhanā of renunciation than not. In this endeavor there is no loss or diminution.

If you can see the value of Braja Dham, it will lead to understanding how the concept of loving society and a loving God intersect and become a reality. And that is what it means to be a Brajabasi: You try to incarnate that ideal, even if it is a doomed effort in this imperfect world, in life.

For the householder, life is to see Krishna in your Lala, Radha in your Lali. To see Radha in your wife and to see Krishna in your husband. To see Nanda and Yashoda in your parents. It is to see Braj reflected in your personal relationships. In a life of simple bhajan and minimally stressed material existence, you can find divine pleasure in your own life by simply seeing that Radha and Krishna are everywhere. And nowhere is that more possible than in Vrindavan or in Vrindavan consciousness. And why should that not be an ideal that we pursue actively, rather than delaying?

But for a Vrindava-rasa-sādhaka, this is only possible in an atmosphere of shared sādhanā. To attempt it in the company of those who are bahirmukha, as described in this verse, means a destiny of ever increasing suffering.

So that is the task before the 21st century vicāra-mārgi Vaishnava: How do I find the authentic meaning of this religion and sādhanā? What does it all mean? How does it work? What is the psychological process and benefit of Vrindavan rasa-sādhanā? How is it beneficial at all steps of the process?

To think about this question, even it is from the standpoint of how Vrindavan consciousness can be used as a weapon against all-consuming consumerism, is a good place to begin. Perhaps it can be shown that bhakti does indeed have the efficacious powers that its proponents the past have insisted on. They have called that power "prema," which requires no explanation, really. It is love.