A postcard from the past

I was a bit surprised the other day when my old friend Advaita Dasji from Holland sent me a postcard I had written from Nabadwip to Radharaman Das way back on New Year's Eve, 1983.

"Radharaman was here. He cleared out his godown here and gave me his entire collection of books, khatas, handwritten documents and letters from Braj. Among them was this letter you wrote him on December 31, 1983." 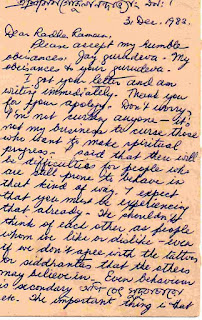 Once again, I was completely baffled about the context of the letter. My bad memory astounds me. Obviously some untoward incident had taken place, but I could not recall at all what it was all about. I asked Advaita and he wrote back to me telling me that he remembered the whole thing very well.

"You and Gadadhar Pran stayed in his kutir one night on the way back from Radha Kund to Nabadwip, Radharaman allowed you to stay, but must have changed his mind about it later and rather rudely told you and GPD to leave his place, even in the brahma muhurta time. Afterwards I told him it was not proper behavior and he wrote a letter of apology to which this was your reply."

I answered, "What a bad memory I have! I do not recall that event at all! Not even now that you tell me about it. We must have annoyed him. That wouldn't surprise me. GP and I both have our individual talents at annoying other people and are quite unconscious of it.

"All I can remember is staying with him at Radha Kund at Tinkori Baba's place during Karttik one year. I liked him very much and am a bit sorry to hear that he has given up the devotional life. I myself am barely back to where I was in 1983. But I suppose I can take it in my own favor that I only remember the good things about him and not the bad experiences.

"It is unfortunate (in my view) that he gave up the Vaishnava practices and ideals after giving so much to it. It is the same with others, too. I was googling something the other day and, as sometimes happens, I came across a Gaudiya Discussions page from 2005. You were also heavily involved in the discussion, though I wasn't. It was about residing in Braj and the adhikara for it, etc. It was actually a pretty good discussion in which you (Advaita) took a kind of middle route, legitimizing the "residing mentally in Braja" position. It was a bit sad to see how some so in favor of Braja-vāsa failed so miserably in their attempt to carry out the sadhana. At any rate there is no loss for anyone in this endeavor. And I am sure that Radharaman's giving you the books and so on from his library has garnered him further blessings that will stand him in good stead for the rest of eternity. Jai Radhe."

2005 is also the year that I went back to Vrindavan for the first time in 20 years... and started me on the road to my own Braja-vāsa. But there are no guarantees for anyone...  We foreigners live here on the edge, at the pleasure of the Mistress of the Dham and the Indian Ministry of Home Affairs. 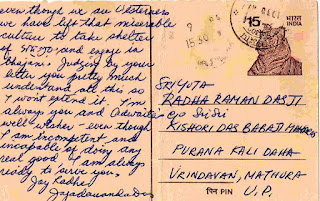 Jagadananda Das said…
Gadadhar tells me that what happened was this: Radharaman was staying at his Gurudeva Kishori Das Babaji's ashram in Purana Kalidaha. His ashram was right next door to Haridas Shastri. Apparently the two of us were praising Haridas Shastri and RR felt that we were insufficiently appreciative of his guru so he got annoyed with us. I don't recall any of this, and I hope that it is not improper to relate this information. It seems that our behavior was not very good manners, though technically not wrong.
Sunday, 09 September, 2018