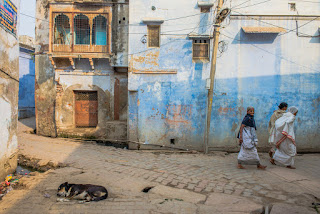 The paths followed by the worms
eating the poison of the sense objects,
and by those who say the self is consciousness alone,
and even by those who have taken exclusive shelter
of the all-powerful Supreme God,
are not appealing to us,
so we have given them up;
we invest our hopes in Vrindavan,
which brings forth
gushing streams of spotless bliss. (1.86)

As Prabodhananda so often does, he comes back from contemplating the good fortune of Radha's kiṅkarīs and the inability of Lakshmi Devi to enter into that rasa to explain what he means. He does so, not by making a philosophical argument on metaphysics, but simply by stating his preference, his ruci, and to leave it at that. His taste is based in his experience, and his experience is the ultimate arbiter. This is to tell us quite clearly that the rāga-mārga is not based on scriptural authority or logic alone, but on the experience of taste. Without rasa, no one does anything. Without rasa, no one formulates a concept of perfection or a goal in life.

After contemplating the eternal form of the Vrindavan world, returning from a perfect samādhi in that blissful realm, where he spoke from his experience of the bliss in the mood of a kiṅkarī of Radha, Prabodhananda comes back to external consciousness to make a declaration to all those who lack faith in Vrindavan, those who still hold to other possibilities...

"All ye who seek the various puruṣārthas! I am sorry you have nothing to offer me! There is nothing in this world that I aspire to -- not sense enjoyments, be they as great as those of the gods in their heavens, not the liberated state of kaivalya, where one becomes absorbed in the bliss of pure consciousness alone, leaving behind the miseries of constant rising and falling in the dualities created by sense perception, and finally, not even for vaidhī bhakti. Not only do I consider these achievements trivial in comparison to attaining Vrindavan, but I pity those who are still duped into thinking that these are God's main gifts to humanity."

The idea is basic to Prabodhananda, to the Gaudiyas in general and to all the rasika sampradāyas that rāgānugā bhakti lies beyond vaidhī bhakti, indeed that vaidhī bhakti is an obstacle to attaining the Svayam Bhagavan. The true God is not simply the one of ethics and duty, but of love, play and bliss. Thus the religion of Vrindavan does not simply reject sense enjoyment and impersonal liberation, but also the worship of God in awe and reverence.

The Krishna of Vrindavan is a mere cowherd boy. He decorates himself not with jewels and gold, but with peacock feathers found on the forest floor, with colored clays, with the leaves and flowers of Vrindavan. He deals in milk and cow dung. The attractions of being a perfectly ordinary simple human being in the purest, distilled forms of human happiness, with utter freedom from the pressures of survival and success. For him, the destruction of demons is done almost without effort, a mere brush of the hand. The demons are ultimately nothing other than minor accessories to the love story that he creates from moment to moment in Braj.

The materialist, the sense enjoyer, is nothing better than a worm in poisonous excrement, enjoying that which has already been enjoyed a thousand times in a thousand forms. punaḥ punaś carvita-carvaṇānām. The aspirant to Radha's service looks upon those who still hanker for the pleasures of the senses as though gazing down from the top of a mountain on scurrying ants below.

Having risen to the clarity of wisdom
the wise man, no more to be grieved for,
looks upon grieving people
as one on a mountaintop
views those on the ground below.

But Prabodhananda does not stop by expressing his pain for the living beings still captured by the illusions of material pleasure, and the futility of taking stool to be nectar. He also expresses dismay at the inadequacy of liberation, so dear to the meditators.

My dear Lord, O master of the universe, since I have directly seen You, my transcendental bliss has taken the shape of a great ocean. In comparison, I now regard the happiness derived from oneness with Brahman to be no more than the water contained in a calf's hoofprint. (Hari-bhakti-sudhodaya 14.36)


Prabodhananda says neti neti to those who say neti neti. But he also says neti neti to the splendor of Narayan, the one whose light is the source of the light of Brahman. Lakshmi is dazzled by that light and cannot see past it into Narayan's soul, the Narayan who looks inward to Vrindavan.

Prabodhananda could not say this without knowing it and experiencing it. He has visited all these realms in one lifetime or another and has abandoned them all. Only by the grace that comes from the association of rasika sādhus, can one come to this state. When the dazzling effulgence of God's Godness is removed. That is the realm the sakhis can enter, but Lakshmi cannot. He does not need the evidence of śāstra, though it is there; he does not require the logic that will satisfy the doubting mind's questioning. He has gone beyond questioning to enter the realm of taste. And he has found no taste superior to this.

Enough of worldly subjects! I find them more horrific than a million hells. Making such great efforts to understand the Vedas and Upanishads is a waste of my time; moreover I fear the liberation of "isolation" (kaivalya). If Shukadeva and other great devotees are intoxicated with the worship of the Supreme Lord, what is that to me? For my part, I only pray that my mind be absorbed in the nectar of Radha's lotus feet, nothing else. (RRSN 84)

Are you going to publish a book with your commentary on the VMA? Let me know if you publish it; I would love to buy it.

16. In the company of Balarama and the cowherd boys, Lord Krishna is continually vibrating His flute as He herds all the animals of Vraja, even under the full heat of the summer sun. Seeing this, the cloud in the sky has expanded himself out of love. He is rising high and constructing out of his own body, with its multitude of flower-like droplets of water, an umbrella for the sake of his friend.

Jagadananda Das said…
Abhyudaya Mandal, Jai Radhe. Yes, eventually. But I have so much on my desk now, I don't have any idea when I will finish it. Starting is easy, finishing is tough.
Tuesday, 25 September, 2018