Religion and Idolatry: Why I worship stones 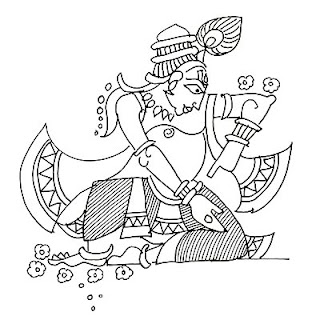 I was trying to find an old article I wrote and it wasn't on the blog. I will need to rewrite and comment on Jiva Goswami's vicāra-mārga and ruci-mārga, an important discussion that I often find myself refering to and need to have a link to send people to. So, looking for that I found this, which probably was on some on-line forum 15-20 years ago and never put on this blog. So, for the record. It is relevant to my earlier post about Jordan Peterson and meaning.

The Vaishnavas also say they believe in the oneness of God. That it is a fundamental doctrine of the Vaishnava creed. But really guys, come on, you have so many "deities" floating around. Are the Muslims right when they accuse you of "idol worship" and "dividing the ONENESS?" I have heard Vaishnavas say "we are not "idol worshippers" like the Hindus or Pagans. But it looks the same. What is the difference?
The word "pagan" evokes all kinds of strange and barbaric rituals. I am not sure that it has a great deal of valid meaning for the purposes of discussion.


Religion is fundamentally about human experience and the wonder of our existence. I don't quite understand what you are thinking. Do you think that Hindus believe these statues are going to give them an apple or start talking to them? Though they may indeed think that it is possible, even your most primitive illiterate villager would have a fairly sophisticated understanding of the relationship between the all-pervading Supreme Being and the piece of painted stone or wood that is before them. They would know that the image is a kind of nexus, a focal point where their own consciousness meets the Deity, that God can also be localized to facilitate things for them.

What is the purpose of pictures and representations in the first place? Do you have a photo of your parents in your wallet, or your husband on your mantelpiece, or perhaps a half-dressed picture of Brad Pitt on your bedroom wall? What purpose do these things serve? Some "true" Muslims are against all image-making, just as they are against music (!). Is this where Tawheed leads us? Is this where you are going?

There are many considerations of sacred time and space that you also need to understand. Call it arbitrary if you like, but human beings have a need to create sacred space and sacred moments. Set aside a place in your home that is dedicated for meditation and remembering Krishna. Yes, God is everywhere and you should see Him (and Her) everywhere. But start by seeing Him/Her in one place.

India is full of these focal points for communally remembering God, each of which has a different flavor. Jagannath Puri is one such place, with its wonderful, colorful traditions. Muslims are altogether too serious (someone was recently remembering Buddhists laughing and joking at a ritual in the midst of grave-faced Westerners) in their condescending attitudes to such primitive "paganism."

This is a festival. The people of this world are suddenly participants in this great game involving God--pulling him in chariots along with all these divine beings from all spheres of the universe, just as it should be.

But the important thing here is that God is complicit in this great game, and he both participates in and approves of it. And in these "pastimes," he is especially pleased by your astonishment, your joy, your aesthetic pleasure, your prayers, your hymns and your dancing.

Only a person who thinks himself very clever says, "God is everywhere, what need have I of Church, Temple, pictures or statues?" Too clever. Television signals are everywhere, but having a satellite dish and a television set helps us to see them, do they not?

It is easy to reduce God to a human projection. Xenophanes said this many centuries before Christ. Buddha practically said the same thing. So did the Mimamsakas. It is not something that Feuerbach or Freud invented, though they certainly developed the idea.

The point is that God is complicit in such psychological processes. God is everything, and he is using everything to increase our joy. The greatest joy is finding Him, seeing Him, being in emotional touch with Him. So, we who believe in a personal, sensual God, engage in sensual activities that increase our joy, increase our sense of wonder and service. Hearing, chanting, looking at the Deity Form, these all help us to see Him (and Her) everywhere, in everything, phenomenal and noumenal.

The world is a world of metaphor—
No thing is a thing in itself.

If horses had gods, their gods would be horses,
said someone with a Trojan horse laugh.

And ever since, each day a sad child grows
to find there is no Santa Claus,
no beardy grandpa on a celestial throne,
no shining blue boy playing a flute—
"These tales are all a bit too cute;
I am no child," he says.

And yet...
The phone booth out behind my fence
is where Clark Kent in secret
kicks off his outer pants!

It's where a broken-hearted girl
tries one last time to retrieve her man.
It's where a trembling toxicomane
scours the towers for another horse to ride.
It's where an exhausted wheeler-dealer
grasps at one last straw to get a loan,
and, failing that, does not go home,
but rings a local whore’s phone.

It’s here the ingenue got the nod;
It’s here that someone talked to God.

I have eyes! I am not blind
It’s just aluminum and glass,
wires, metal, square ugliness—
No Central Square of miracles!

But these are empty eyes
of aluminum and glass
wires, metal, ugliness.
They see empty truths, and those are lies.

Naked facts are the sound of one hand clapping,
They are the tree falling in an empty forest,
They are bones without the flesh of meaning,
while meaning gives flesh to the barest bones.

And this is why I worship stones.


What is really meant by idolatry? The ancient Jewish criticism was that God cannot be represented by anything, and that if one tried to do so, then one was automatically diminishing God. The Islamic expression for idolatry "shirk" or "mushrik" means adulteration or applying worldly attributes to God, or putting something in the place of God, implying that something could be His "partner" or equal.

So this idea has been extended, and in Christian circles one often encounters a rather sophisticated deconstruction of worship, which sees the mind as constantly setting up idols in the place of true surrender to God. So the discourse around idolatry is really about substituting other ideals in the place of God, like making money, fame, or adoration one's goals in life.

Religions that hate idolatry tend to be prophetic and dualistic. The prophets are always coming out and inveighing against the "new idols" of a religion -- institutions, hierarchies, sensuality, etc. -- which may have insinuated themselves into the religion as God-substitutes, or as valid co-goals to pure love of God (or union or whatever way the goal is expressed).

So, in fact, to simply see an image as the sign of "idolatry" is rather missing the point. The real idolatry is to mistake ego or worldly goals for true devotional ones. In our tradition, that goal is prema, pure love.

But we do not believe that the image of God diminishes Him. We hold that God in human form is a glory, not a defect. He diminishes Himself in order to enter into a relationship with the finite consciousness of the individual soul, and seeks various strategies, including the Deity form, to do so.


"Of all Krishna's pastimes, the supreme are those conducted in human form, for the human form is his true identity. He appears in cowherd clothing, holding a flute in his hand, an adolescent and expert dancer. All his actions in this form seem exactly like those of human beings." (Madhya 21.101)

I really enjoy reading this article . Thank you for making it available.

Prem Prakash said…
If God is everywhere, then He certainly is in the stone, too.
Sunday, 23 September, 2018