2. Confession: Setting the scene: The saga of Paundraka Vrindavan Today

June 14, 2018
The story I began yesterday has a couple of months. This letter, composed to present our case to lawyers, will serve to provide you with the setting for events that will follow.

One of my friends coined the term "Paundraka Vrindavan Today" and I found it useful and so have been using it. Paundraka is a lesser known character from the Krishna cycle in the Bhagavatam. He claimed to be the real Vasudeva, and much like the carpenter in Panchatantra he attached wooden arms to his body to give the appearance of having four arms in order to fool the gullible.


To whom it may concern:

My name is Jagadananda Das (PhD in Sanskrit from London SOAS). I teach Sanskrit at the Jiva Institute in Vrindavan, India. I am the founder of the popular Hindu web-zine "Vrindavan Today."

Our original domain of vrindavantoday.org has been hijacked by an ex-contractor and system administrator, Alexander Shenkar. His refusal to return the domain and hosting to us, caused us to take things in our own hands and to flee to a newly registered domain, vrindavantoday.com, where we have continued to publish in keeping with our mission statement.

Furthermore, Mr. Shenkar has been using the original .org domain to publish defamatory articles that personally attack some of the principals involved with the project, thus tarnishing our brand.

He has further filed a DMCA take-down notice, claiming ownership to the site and the brand even though he never wrote a single article for Vrindavan Today, nor directly contributed to the building of the brand.

The Vrindavan Today website was first started by me on Blogger, where it was originally called BVHA News. The site is still on line though it has been inactive since 2010. Vrindavan Today's roots in the BVHA (Braj Vrindavan Heritage Alliance) are the fundamental indicator of our principal concern with Vrindavan's material and spiritual heritage and environment.

In late 2010, my friend Zvonimir MW Tosic transferred the existing articles to Word Press and we expanded our mission, took on the name Vrindavan Today and a new URL, all of this being arranged by him. He also charitably took care of paying for the hosting (Dreamhost) and domain name.

When Zvonimir was less able to give of his time, Alexander Shenkar came forward as a volunteer in 2014 to help upgrade the website and take over the hosting and domain. I agreed and the switch was made. Alex also had ideas about how to grow the website which we appreciated and with his help, the site was able to grow considerably. He also worked on improving our FB page, etc.

The transfer to Alexander was complete in August 2014. The domain was transferred to him in 2015.

This arrangement went on without trouble for some time, until 2016 when Alexander began having personal difficulties including a fairly intense health problem that kept him hospitalized and disabled for a long period of time. I also found him difficult to deal with for other reasons. His being in America and having no personal contact also made working with him problematic. Thus when he proposed opening bank accounts and so on for Vrindavan Today, we were reluctant to proceed.

We asked him numerous times to return the website domain and hosting to us so that we could have full control over our intellectual property. He was not only uncooperative but abusive. When local expertise became available this year, we moved with more pressure to get him to transfer the requested domain and hosting, he wrote the following: 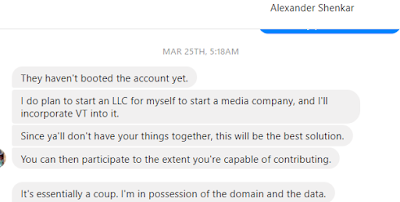 By calling it a “coup” he has de facto admitted that he is engaged in an act of illegal possession.

Alex has tried to justify his claim here:

Needless to say, his claims are weak. He worked on the website, but was not a producer of content. Since he has taken over the site, he has not been producing content that is in keeping with the spirit of the site itself, which can be seen in the About page, which he has now replaced with another file on his site.

The "About" page had been unchanged since 2014, when I added the names of the individuals making up the editorial board. The original page can still be seen on our current .COM site (http://vrindavantoday.com/about) and on the WebArchive from 2015.

Our editorial board and the Vrindavan Today Foundation's trustees shows our profound connection to the community here in Vrindavan.

Mr. Shenkar, needless to say, has no roots in the local community, nor any contact whatsoever with anyone in Vrindavan other than a few people here inimical to Dr Sri Satyanarayana Das Babaji Maharaj, the director of the Jiva Institute and one of our trustees and editorial board members. Mr. Shenkar has decided to work together with these individuals to besmirch his reputation and his work. We have no objection to him exercising his free speech, but it is most unethical and no doubt illegal for him to use our brand name to blacken our name.

Copying From Our Site To His

Since the separation of the sites on March 29 and after he became aware that we had copied the site and stopped posting to .ORG, Alexander began by copying articles from our site, which can still be seen by comparing the two sites after April 15. I believe he set up an automated procedure for this, but we placed secure measures on our site to stop him from doing so.

The last such article, written by me, was the following, though perhaps attempts were made as late as May 25. He certainly has no copyright claim to any of this material. Compare:

Any examination of the other articles will immediately make it clear which is the original and which the copy.

Current philosophy of the two sites

Whereas we continue to publish articles in keeping with the mission statement in the "About" page. refered to above, and as indicated by the spirit in which it was born, Alex has published very little other than several articles which serve no other purpose than to defame members of the original editorial board, including myself, the founding editor.

Since 2014 we have been taking steps to make our legal position more solid. The following has been accomplished so far:

Mr. Shenkar probably did not notice that the VT Foundation has been a legal charitable trust since August 16, 2014, registered at Mathura. The registry number is 4/117/275/298/136. Scans of the documents are provided separately. (ANNEX I)

A list of the members of the Foundation Board can be found here.

The Foundation has already hosted events:

This has, according to our lawyers, been approved, but official papers are still forthcoming.

Needless to say, we do not think that Mr. Shenkar has any rights to the site or to the brand name "Vrindavan Today" whatsoever, and his misuse of the site to undermine the people who for the past eight years have slowly been building the brand name and expanding the purposes for which it was created.