VMA 1.71 : The altar for the pure love sacrifice 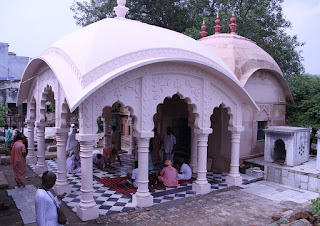 You fool, get moving now, on this very day!


Give up all of this and go to Vrindavan,


the desire tree that can grant all your wishes,
this Vrindavan that is the sacrificial altar
for the pure prem of Radha’s lord of love.

Go, without thinking any other duties

Prabodhananda continues exhorting to his mind to give everything up and resort to Vrindavan. Here the sense of urgency seems to be increasing. Indeed, it would seem that the last series of verses were written in one surge of creativity. His language is strong, again and again calling his mind a fool. It is not that such strong language is absent from other texts like the Gītā and Bhāgavatam. Krishna in the Seventh Chapter also calls those who do not surrender to him "fools" (mūḍha):

The wicked do not surrender to me. They are foolish and the lowest of mankind; their intelligence has been robbed of them by illusion and they have taken refuge in a demonic mentality. (Gītā 7.15)

Krishna makes other statements like this in the Gītā, particularly in the 16th chapter. All this seems politically incorrect in today’s world. How dare Krishna insult those who don't follow him, which seems like a sectarian statement of exclusion. This is a wrong reading, since it is not a specifically sectarian statement; Krishna is here speaking generically of God in all his various forms, to each according to his own religious beliefs. God takes form according to the particular mentality of the devotee. This is the meaning of the following verse of the Gītā:

I reciprocate with all souls in accordance with the way they approach me. Everyone follows my path in all respects. (4.11)

In other words, there is no sectarianism in the Bhagavad-gītā; it provides an objective standard for human life, which includes theism. It is meant for spiritual realization and not for the grosser pleasures. Prabodhananda does not need any further reminders of the importance of the human form of life. But he calls his mind a fool because, as he said in verse 1.67, it would be madness to give up the nectar of the gods to eat stool instead.

And what is a fool but one who after attaining this valuable human form of life does not seize the opportunity to attain knowledge of his true spiritual nature and love for the Supreme, instead losing himself in the glamor and enticements of the transient world?

Here, he uses the interesting description that Vrindavan is the sacrificial altar for Radha and Krishna prema. I have translated sattra as the altar rather than the sacrifice itself because it is a place and not an action. Nevertheless, the principle of sacrifice is basic to the entire concept of sādhanā. Krishna’s instruction in the beginning of the Gītā illustrates that principle:

This world is a place of bondage to work wherever it is not done for the purpose of sacrifice. Therefore, son of Kunti, being free from attachment, engage in action as a sacrifice to God. (Gītā 3.9)

What the Gītā teaches is that though there are different sacrifices or sādhanās, with the same external goal of seeing the Self and God in the totality of existence (4.35), and with the same external symptoms of spiritual perfection (Gītā 2.52-72), the form that God reveals to each devotee is unique to them. Krishna can speak both as himself and as the generic God.

In previous verses, Prabodhananda spoke of the external signs of freedom from desire as both means and end, but here he talks about Vrindavan as the actual appropriate sacred place for the performance of the ultimate sacrifice of commitment to attaining Radha and Krishna. The sacrificial altar always represents the sacred center of the universe, the place where the divine realm meets the mundane. It is the crucible into which ego, the body, mind and senses are given as oblations so that one can reach the ultimate destination.

The difference is that this crucible has a special function. It is a particular portal to Transcendence that opens to the world of madhura-rasa.

Looking at comparative religion in regard to the budding theme (see Gardiner's sign M22):

And observe that being held in the right-hand of the leading figure approaching Djehuty (j3ḥ-ḏḥw.ty):