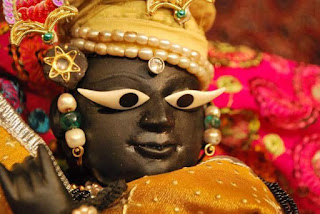 I have fallen into the blind well of household life,
I am being devoured by the black snakes
of lust and other vices.
O abode of Vrindavan!
when will you lift me out of this well
and, acting as a mother,
give me shelter on your lap? (1.88)


The next few verses have pretty much the same theme, so I have bundled them together.

When will I accept a vow of poverty
and live in solitude in Vrindavan,
which is worshiped even by the gods,
and there serve with great loving feeling
the splendor named Sri Sri Radhika Madhava? (1.89)

When will I deceive my wife,
children, friends, well-wishers, and family,
who have caused my complete devastation,
and with firm resolve flee to the forest
where Hari enjoys his pastimes. (1.90)

I have wasted countless births
anxiously absorbed in body, home and all the rest.
Even now that I am supposed to be intelligent,
I am still bewildered by such things.
O Vrindavan, your holy name alone is my shelter.


These verses continue the theme of praying to Vrindavan for residence there. In verse 88, Prabodhananda Saraswati prayed to Vrindavan as a mother goddess who has independent power (svayaiva) to bestow this boon on her devotees. He will use the metaphor of “mother” several more times in this century (93, 99, 100).

I arrived in Vrindavan two days ago, coming on the “Gaudiya Vaishnava Express.” As I walked to the station, I wondered if the name was justified, but as soon as I arrived I immediately felt my bodily hairs bristle on seeing so many Vaishnavas waiting for the train, householders and vairagis alike. It warmed the heart.

I spent my time in the train mostly trying to complete typing the Vṛndāvana-śataka, which is the same as the 17th śataka in the current editions. Interestingly, Sundarananda Vidyavinoda has been quoted in the introduction saying that 23 śatakas have been discovered, but only 17 printed. I haven’t seen any edition with 23 centuries. I am certain that this 17th śataka is the original one, and that the others were written probably after Prabodhananda wrote some of his other works. I will look for evidence for or against this intuition. Because I was trying to get this typing finished, I did not engage much in conversing with other passengers. However, that does not mean I was immune to their presence.

The best part was the "nagar kirtan" led by a Gosai from Barasat and his 50-60 followers who were headed for parikrama around Braj. They walked up the aisles single file from one end of the train to the other – except AC of course. They did it both in the evening and again in the early morning. I joined them in the morning and ended up attending mangal arati to their Laddu Gopal. There appeared to be a number of highly committed Vaishnavas in the group.

Then when I got back to my seat, there was a group of about 20 women from Nabadwip, an all-women group also headed for 84-kos parikrama. They sang several kirtans together -- Krishna's 108 names, then the Shuka-Shari argument. They gave off a very nice vibration. I don't think a train journey has ever gone so smoothly for me.

So it is good to be back in the Dham. For those who read my blog... I have been blissfully off line since I got here, and have been using my time to continue that Vṛndāvana-mahimāmṛta typing work, which is almost finished now.