Bhakti Sandarbha 338 : Worship of Kṛṣṇa Along With Rādhā Is Supreme 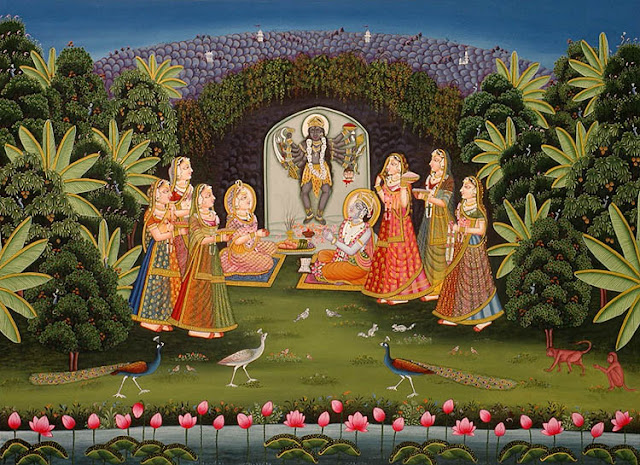 Anuccheda 338
Worship of Kṛṣṇa Along With Rādhā Is Supreme

And even as regards Kṛṣṇa in Gokula, the glory of Śrī Kṛṣṇa when He performs pastimes such as the rāsa-līlā along with the gopīs of Vraja is even greater still, as described by Śrī Śukadeva:


A faithful person endowed with fortitude, who hears or relates this sport of Śrī Viṣṇu with the damsels of Vraja as well is blessed with supreme devotion to Bhagavān and is quickly freed from lust, the disease of the heart. (SB 10.33.39)

"As well" (ca) implies other pastimes as well. The word atha is used in the sense of “or,” which means that one may either hear or describe these pastimes. Indirectly, this also implies meditation on the same pastimes and other similar practices. The word “supreme” (parām) as an adjective of devotion indicates that there is no devotion superior to this [which follows in the wake of the gopīs]. In addition, one very quickly gives up lust and other impurities, which are the diseases of the heart.

Although devotion to Kṛṣṇa as He appears in His pastimes with the gopīs is generally concluded to be supreme, yet higher still is devotion to Kṛṣṇa who is engaged in pastimes with His most beloved, Śrī Rādhā. This is the natural conclusion. But the confidential pastimes of Kṛṣṇa with the gopīs are not to be worshipped by a person whose senses are disturbed by sexual feelings, nor by devotees who relate to Bhagavān in the mood of a father, son or servant, because these pastimes are opposed to their own internal disposition. It should also be understood that the confidentiality of these pastimes is sometimes partial and sometimes complete.

Earlier it was said that among all forms of Bhagavān, rāgānugā bhakti is primarily executed towards Kṛṣṇa. Kṛṣṇa performs His pastimes in Gokula, Mathurā and Dvārakā. Of these three, rāgānugā bhakti is most suitable specifically towards Kṛṣṇa in Gokula. This is the intention of citing the statement of Uddhava in the previous anuccheda. This was also established in Kṛṣṇa Sandarbha (Anu. 183).

In Gokula Kṛṣṇa has His parents, cowherd friends and the gopīs. Of these, His pastimes with gopīs stand above all others. Then again, the pastime of dancing with gopīs is the best. And of all the gopīs, Śrīmatī Rādhā is supreme. Therefore, worship of Kṛṣṇa along with Rādhā is the best.

Śrī Jīva cites the last verse of the five chapters describing rāsa-līlā. This verse praises the benefit of hearing or describing the pastimes of rāsa-līlā. He, however, warns that those who are not free of sensual pleasure should not listen or describe the confidential dealings of Kṛṣṇa with gopīs. The reason for this is that when such a person would listen to these confidential activities his sex desire will become activated and thus mind will become captivated by that. Then instead of thinking of service, he would only think of enjoyment. The mind has the characteristic of activating past experiences by hearing or seeing objects and activities that resemble one’s past experience. This happens naturally without one’s conscious involvement. If the mind becomes full of sexual thoughts then one would have a problem in getting out of it. Either one represses this desire or he would covertly engage in sexual acts. In both cases one will become deviated from the path of bhakti. Therefore, one must be careful and heed Śrī Jīva’s advice. There have been many examples of devotees straying away from the path of bhakti or acting hypocritically because of not being judicious in hearing or describing the rāsa-līlā.

One may raise a doubt here. The verse seems to be saying just the opposite to the above warning. It says that by hearing or describing the play of Kṛṣṇa with Vraja damsels one would become free of the disease of heart, the sex desire. The answer lies in the word dhīraḥ. The recommendation to hear or describe this līla is for a person who is dhīraḥ or one who is situated in the sattva-guṇa. Such a person will certainly benefit from hearing such play of Kṛṣṇa with gopīs. Those who are under the influence of rajas and tamas will have trouble.

Śrī Jīva also says that those who are in the bhāva of parents, son or servant also should not dare to listen this līlā because it goes against their bhāva. Certainly parents should not listen to the intimate affairs of their son, nor the children of their father or the servants of their master. Such descriptions do not nourish their bhāva.

Splendour from Latin splendor, from the verb splendere (“to shine”):

Rādhā is the manifested form of pure love for Kṛṣṇa; she is the hlādinī śakti. Because of this they had previously assumed different bodies on Earth, although really one, but now they have become manifest under the name of Caitanya in order to attain to non-duality and oneness: I praise the true form of Kṛṣṇa enveloped in the radiance of the bhāva of Rādhā.

“According to the tradition, the Heart is the Supreme (anuttara); it is the very self of Śiva, of Bhairava, and of the Devī, the Goddess who is inseparable from Śiva. Indeed, the Heart is the site of their union (yāmala), of their embrace (saṃghaṭṭa). This abode is pure consciousness (Caitanya).

As consciousness, the Heart is the unbounded infinite light (prakāśa),”

Continue reading on Page 11 of Born of the Yoginī’s Heart: Reflections on the Nature of Meditation and Ritual in Abhinavagupta’s Paratrisika-laghuvrtti: