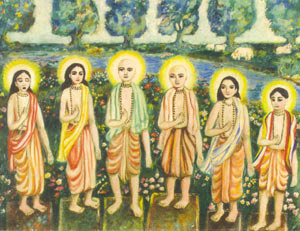 The Bhakti Sandarbha texts that appear here are not the official version, which still has to go through more editorial changes. It represents the state of the work after I have looked at it and made my changes. The Jiva Institute edition of the Bhakti Sandarbha should be finished and published later this year, and also made available in electronic form soon thereafter. This is only meant to give a foretaste, but better not to quote or attribute it to Babaji Maharaj. Thank you.

N.B. Many e-books are now available from jiva.org, as are the other first four Sandarbhas in hard copy. Someone wrote and said they thought these e-books were being given freely. That is not the case. In order to produce texts of high quality, a team of scholars and volunteers, etc., participate in the production at all levels. The costs of production are high, and any profits are reinvested in further publication and other projects of the Jiva Institute. Scholarly publications everywhere are expensive because of the low volume, so please do not be stingy in this matter. Your money will go to making further high-class and dependable translations available.

Remember that the Jiva Tirtha courses with Satyanarayana Dasaji are ongoing. You can also take beginner or advanced Sanskrit with me. Registration is now open. Register here. The opportunity to study with an extraordinary Vaishnava scholar like Babaji in the holy dham of Vrindavan is unequaled anywhere in this world. Rare and most fortunate are the souls who can take advantage.

Uddhava then describes the result of pure devotion to Kṛṣṇa:


What person who is conscious of the favors You bestow upon Your devotees could possibly turn away from You, the very Self of the entire cosmos, the most beloved, the supreme ruler and one who bestows all desired boons upon those who have sought refuge in You? What person would strive for something that is conducive to prosperity but results in forgetfulness of You? And what fortune will not attend us who delight in the dust of Your feet? (SB 11.29.5)

The pronoun "Him" (taṁ) is in apposition to “You” (tvā) and refers to the description of Kṛṣṇa from the previous verse. Thus Uddhava asks: What person who is "conscious of the favors You bestow" (sva-kṛta-vit), i.e., who knows the favor You bestow by manifesting Your beauty and other personal attributes, could possibly abandon You?

The beauty of Bhagavān is as described in the teachings of Śrī Kapiladeva:


Bhagavān Hari has a smiling lotus face, with reddish eyes like the interior of a lotus. His body is dark like the petals of a blue lotus, and in His hands He bears the conch, disc, club and lotus. (SB 3.28.13)

Is it not the case, however, that some people actually do give up Bhagavān? Such as those with particular qualifications who are being instructed by Kapila in this statement:


At this stage the yogi draws back his mind, which he used to attract the Lord just as a hook is used to catch fish, from the beautiful image of Bhagavān, the object of his meditation. (SB 3.28.34)

[Because the yogī being described is at the perfectional stage and what is given up is not Bhagavān directly, but the meditation on Bhagavān as a yogic process .]

What are His specific characteristics? By His very essence He is "the dearmost of all souls” (akhilātma-dayita). This means that by He is the supreme ruler who is millions of times more dear than life itself .

The particle nu is used in this verse in the sense of conjecture.

Uddhava asks a [second] question as follows: “Leaving You aside, who would worship some other god or take recourse to other practices, such as dharma and jñāna, simply for the sake of wealth (bhūtyai) or to attain liberation and thus forget the material world altogether (vismṛtaye)?” [The response to Uddhava’s rhetorical question is that] of course, no one would do such a thing.

And by saying, “What fortune will not attend us, etc.?”, Uddhava indicates that for devotees such as him, even these various results are included within devotion to Kṛṣṇa. The particle vā ("or"), used in conjunction with the question "what" (kim), indicates a disregard even for these various results. This was stated by Bhagavān Himself:


Whatever may be attained by execution of prescribed duties, penances, cultivation of jñāna, renunciation, practice of yoga, offering of charity in accordance with scripture, or any other means of ultimate welfare, is easily attained by My devotee through engagement in bhakti-yoga to Me. He can also attain heaven, liberation or My abode, should he ever desire them. (SB 11.20.32-33)

The giver of a boon is more than the boon he grants. A devotee understands this and thus never abandons Bhagavān. Actually a pure devotee makes no such calculations. He or she just loves Bhagavān and in love there are no demands. Those who approach Bhagavān for some material boon or even liberation are not very intelligent. They do not understand that if they have Bhagavān they have everything, but if they ask for a boon that is the extent of their attainment. Their desire is to enjoy independently of Bhagavān and because of this desire, their intelligence becomes conditioned. To have the separatist mentality and to desire boons from Bhagavān is considered self-deception according to Śrīmad Bhāgavatam (1.1.2). While commenting on that verse, Śrīdhara Svāmī writes that even the desire for liberation is a self-deception (pra-śabdena mokṣābhisandhir api nirastaḥ).

If we could see the welfare done to us by Bhagavān, even without our asking, we would feel grateful to Him. But we take His favors and the facilities given us for granted. Thus one who does not acknowledge the gifts given by Bhagavān is ungrateful.