Bhakti Sandarbha 329-330 : The Welfare Done by Bhagavān Cannot Be Repaid 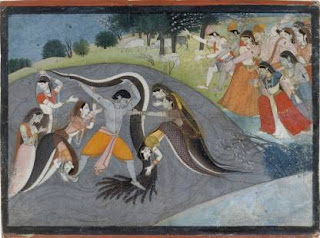 N.B. Many e-books are now available from jiva.org, as are the other first four Sandarbhas in hard copy.
Remember that the Jiva Tirtha courses with Satyanarayana Dasaji are ongoing. You can also take beginner or advanced Sanskrit with me. Registration is now open. Register here. The opportunity to study with an extraordinary Vaishnava scholar like Babaji in the holy dham of Vrindavan is unequaled anywhere in this world. Rare and most fortunate are the souls who can take advantage.

Should Bhagavān question, “How is it that one can give up even fruit such as these, but not Me? And what are the favors I have bestowed [upon My devotees]?”

"O Supreme Lord!" (īśa) is in the vocative. “The wise” (kavayaḥ), i.e., the omniscient, even if endowed with a life span like that of Brahmā, i.e., even if they serve and worship You for that length of time. The "welfare" (kṛtam) means the favors bestowed by Bhagavān. While remembering such welfare, they feel ever-increasing joy (r̥ddha-mudaḥ), the great abundance of supreme bliss resulting from devotion to Bhagavān. They thus cannot redeem their debt to Bhagavān, which is to say that they cannot see what they can do to return the service, i.e. to repay Him for what He has given them. and thus there is no question of leaving Him, as was expressed in the previous verse.

In the second half of the verse, Uddhava describes the favor bestowed by Bhagavān. “Of the embodied souls” (tanu-bhṛtām) refers to some embodied souls to whom, being recipients of Bhagavān’s mercy, He appears externally in the form of the preceptor or guru, and internally as the Supreme Soul, He appears in the heart to be meditated upon. In both these forms, He drives away all impurities, or in other words, all that is opposed to His devotion, and reveals His true nature (sva-gati) to them, i.e., He gives them direct experience of Himself.

There are various types of welfare done by Bhagavān. He is giving us air to breathe, water to drink, light to see, and earth to dwell upon and grow our food. But more than this is the human body He has awarded us, through which we can understand both Him and ourselves. The highest welfare, however, is that He gives spiritual knowledge through the scriptures. Without this knowledge a human being remains ignorant like an animal. But even if we have the scriptures, we will still not get the proper understanding if there is no one to teach them. Vidura says clearly that knowledge is not possible by one’s own effort (3.7.39). Śrī Kṛṣṇa also confirms that for a living being who is under the influence of beginningless ignorance, self-realization is not possible by one’s effort alone: one needs to take a teacher (11.22.10).

Therefore, Uddhava says that Bhagavān appears as the ācārya externally and as the Immanent Being within the heart to guide a seeker on spiritual path. Then by His own grace He reveals Himself to the sincere practitioner (Gītā 10.10-11). This is His highest welfare. One who understands this is called a kavi, and even if such a person lives for trillion years he cannot repay his or her debt to Bhagavān. This is so because there is nothing in their possession that can match the grace given them by Bhagavān.

In the same vein, Bhagavān Kṛṣṇa also spoke about the superiority of devotion to Him immediately following Uddhava’s inquiry:


O Uddhava, I shall explain to you that supremely auspicious dharma of Mine. By following it with faith, a mortal conquers over insurmountable death. (SB 11.29.8)
In the four verses beginning with this one (11.29.8-11), Kṛṣṇa spoke about pure devotion to Him for devotees like Uddhava, who are exclusively devoted to Him. Then in the group of four verses following those (11.29.12-15), Kṛṣṇa reflected in a different manner, and out of compassion for those who are not of the nature of Uddhava, He spoke to awaken in them the inclination towards His devotion.

Because people are generally absorbed in rivalry with others and so on, even if somehow they come to be introspective, they become aware only of the need to meditate on Bhagavān as the Supreme Soul within the heart of all living beings [and not to worship any personal form of God]. Considering this fact, Kṛṣṇa mercifully spoke so as to quickly dispel their rivalry and other impurities and to enable them to direct their awareness specifically towards Him. In the Gītā, Kṛṣṇa made this declaration about the Supreme Immanent Self: “With but a single fragment of Myself, I pervade and support this entire cosmos” (Gītā 10.42). In place of the worship of His partial expansion in the form of the Supreme Self, Paramātmā referred to in this statement, however, Kṛṣṇa taught about devotion to Him in these four verses :

Śrīdhara Svāmī comments: “In three verses beginning with this one, Bhagavān speaks about internal devotion. He says, ‘One should see Me alone, situated as the Regulator, Iśvara, within all living beings as well as in his own self.’”

What are the characteristics of the Iśvara described in this verse? He exists both externally and internally. It means He is complete. And why is that? Because He is without internal and external coverings, apāvṛtam. And how is that so? Because He is like the sky (kham), meaning that He is untouched and all-pervading. In this verse Bhagavān says that one should see Him alone, directly in the form of Śrī Kṛṣṇa, and not merely in the form of the Supreme indwelling Self, Paramātmā. This is precisely what Śrīdhara Svāmī meant when he commented: “Bhagavān now speaks about internal devotion.”

In this anuccheda Śrī Jīva Gosvāmi confirms the superiority of bhakti to Kṛṣṇa by citing His own words. Devotees of Kṛṣṇa envision His presence in everything. In Paramātmā Sandarbha it was explained that material nature, prakṛti, is under the control of the Paramātmā who is an expansion of Bhagavān. Nevertheless, Kṛṣṇa recommends that a devotee should envisage only His presence instead of that of Paramātmā. This will make them free of any any rivalry or envy of others. Generally, we have rivalry with those who are equal to us, envy towards those who are superior to us, and disrespect for the inferior. But if we can feel the presence of Kṛṣṇa -- our object of love -- in everyone, then all these impurities are washed away.

Envy is a very big obstacle on the path of love. It leads to pride, disrespect and ultimately offensive behavior. Therefore, in the very beginning Śrīmad Bhāgavata Purāṇa states that the supreme dharma in the form of prīti is meant for those who are free of envy and have a compassionate heart (nirmatsarāṇāṁ satām, 1.1.2). In the principal verse of this anuccheda, Śrī Kṛṣṇa gives the methodology to be free from the disease of envy.