Bhakti Sandarbha 327 : Kṛṣṇa Comes Under the Control of His Pure Devotees 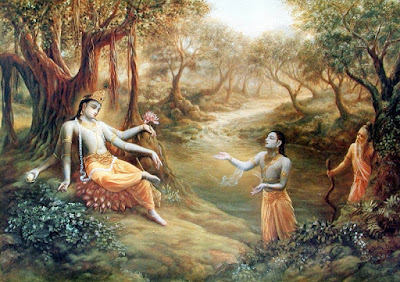 N.B. Many e-books are now available from jiva.org, as are the other first four Sandarbhas in hard copy.

Remember that the Jiva Tirtha courses with Satyanarayana Dasaji are ongoing. You can also take beginner or advanced Sanskrit with me. Registration is now open. Register here. The opportunity to study with an extraordinary Vaishnava scholar like Babaji in the holy dham of Vrindavan is unequaled anywhere in this world. Rare and most fortunate are the souls who can take advantage.

Anuccheda 327 : Kṛṣṇa Comes Under The Control Of His Pure Devotees

Such a devotee attains not only the results available through jñāna, yoga and other processes, but something far superior, as indicated in Uddhava’s next statement:


O infallible one, O friend of all! Is it at all astonishing that Your exclusively devoted servants make You their own when You delight in the company of animals, even though Your very pedestal is polished by the tips of the brilliant crowns worn by the great rulers of the cosmos as they bow down out of respect for You? (SB 11.29.4)

The address “O friend of all” (aśeṣa-bandho) can mean either that Kṛṣṇa is the one and only friend of His servants who have taken exclusive (aśeṣa) shelter in Him or that He is a friend to all (aśeṣa), including the asuras. This means that He acts for the welfare of all without discrimination, by awarding liberation and other such boons.

The [rhetorical] question, "Is it at all astonishing for You…?" (etat tava kiṁ citram), indicates that is not at all a wonder that Bhagavān submits to those who are exclusively devoted to Him (ananya-śaraṇeṣu), i.e., oblivious to the practices of jñāna, yoga, and so on, and "His servants” (dāseṣu) the pure devotees such as Bali. "Make You their own" (ātma-sāttvam) means that Bhagavān comes under the control.


Neither practice of yoga, nor sāṅkhya, nor prescribed duties, nor the study of the Vedas, nor austerities, nor renunciation can captivate Me as does forceful devotion unto Me. (SB 11.14.20)

For Bhagavān whose nature is such, criteria such as caste and other external attributes have no bearing, which is evident even in His pastimes in the spiritual domain. Uddhava hints at this in the second half of the verse. The phrase “in the company of” (saha) is used in the sense of companionship and more specifically friendship. "With the animals" (mṛgaiḥ) means those that roam in Vṛndāvana.

[Thus Uddhava is alluding to the fact that Kṛṣṇa used to delight even in the friendship of the deer and other animals of Vṛndāvana . ]

Yet what is the personal status of Bhagavān [who plays in this way?] He is honored even by the great rulers of the cosmos, such as Brahmā and Śiva, who bow down before Him.

The implication of all this is that Kṛṣṇa awards liberation, which is the highest fruit of the practices of jñāna and yoga, even to the demons. Yet in the case of His servants, Kṛṣṇa comes directly under their control, as He did with the Pāṇḍavas by acting as their friend, messenger and watchman. The import is that bhakti performed specifically to Śrī Kṛṣṇa, whose nature is described in the verse, is the chief process.

Kṛṣṇa is the supreme regulator (Brahma-saṁhitā 5.1). The great regulators of the universe such as Brahmā and Śiva bow their heads to Him, yet He is regulated by His surrendered devotees. This is evident from His being bound by Yaśodā, as mentioned in the previous anuccheda. Yogīs and jñānīs can never know such great fortune. They can only attain sāyujyā or sālokya-mukti. By this message Uddhava wants to convey the importance of rāgānugā bhakti. There is nothing that pleases Kṛṣṇa as much as loving devotion.