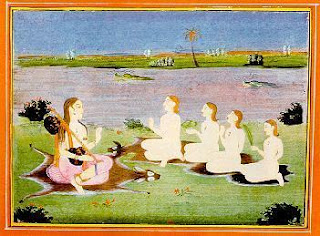 N.B. E-books are now available from jiva.org, as are the other first four Sandarbhas.
Also anyone interested in taking Sanskrit with me or participating in the continuing Jiva Tirtha course (Oct. 2020) can register here.

The specific gopīs mentioned in this verse were aspirants undergoing practice (sādhana) prior to the stage of attainment [and not the eternally perfect gopīs ]. The same applies to Śrī Nārada, who describes his attainment of a spiritual form as an associate of Bhagavān in these words:


When I was awarded a pure transcendental body as an associate of Bhagavān, my material body made of the five elements fell down because the karma which had set it in motion came to an end. (SB 1.6.29)
So when Nārada says, “we attained Bhagavān through devotion,” he is referring to his own stage of practice prior to this attainment. It was only at that time that he practiced vaidhī bhakti.

Having attained rāga, Nārada's bhakti is now rāgātmikā, no longer subservient to any sort of injunction, as implied by the principle enunciated in these two statements:


Virtue and vice resulting from good and evil are not found in devotees who are exclusively fixed on Me. (SB 11.20.36)
And:

Therefore when Nārada said, “many attained that destination” (bahavas tad-gatiṁ gatāḥ, SB 7.1.29), the result attained by them is spoken of as having taken place in the past. The implication of the above verse (SB 7.1.30) is that just as these practicing gopīs attained perfection through amorous feelings, current practitioners will also attain the gopīs’ bhāva just by hearing about their virtues, their love and so on.


The pastimes of the glorious Bhagavān have been sung in innumerable ways through exquisite songs and poetry. Simply by hearing these songs, the minds of women are irresistibly drawn to Him, so what to speak of those who see Him directly. (SB 10.90.26)
अथवा पार्षदचरस्यापि चैद्यस्यागन्तुकोपद्रवाभासनाशदर्शनेनैव साधकत्वनिर्देशः।

Śiśupāla, on the other hand, was previously an eternal associate of Bhagavān in Vaikuṇṭha [and thus cannot be said to have attained Bhagavān through practice]. To facilitate Bhagavān’s pastimes, he temporarily manifested an antagonistic disposition. So offering Śiśupāla as an example of someone who attained Bhagavān through animosity is only in the sense that one can observe the destruction of his apparent antagonism.

The “affection” (sneha) [by which the Pāṇḍavas attained Kr̥ṣṇa] means the rāga that develops through relationship (sambandha). Both the Vṛṣṇis and the Pāṇḍavas attained Bhagavān through this affection. As such, the two of them are actually examples of one thing. This conclusion is required to preserve consistency with earlier verses, since only five attitudes have been mentioned in SB 7.1.25, and in the verse immediately following the one under discussion (SB 7.1.31), Śuka says: “Out of these five [bhāvas]” (pañcānām).

[The above verse, however, which gives examples of those who attained perfection through these five attitudes, mentions six groups of individuals. In order to find agreement between all these verses one must take the Vṛṣṇis and Pāṇḍavas as having the same attitude.]

Furthermore, both the Vṛṣṇis and the Pāṇḍavas are related to Kṛṣṇa and have affection for Him, thus both these attitudes are present in them. The word sambandha [which is found only in SB 7.1.30] is mentioned to show the specific nature of this rāga.

Just as the gopīs mentioned in this verse were sādhikās and not the eternally perfect gopīs, the Vṛṣṇis referred to were specific members of that dynasty similarly still undergoing practice. And in the case of the Pāṇḍavas, the reference is to some of their relatives who were also practitioners prior to the stage of attainment. Therefore, the affection born out of relationship here actually only means the taste (ruci) for such a relationship.

The words “through devotion” (bhaktyā) mean “through the path prescribed by scriptural injunctions, i.e., vaidhī bhakti.” This is understood because Nārada took up this topic to instruct about the path of bhāva that can be attained through the maturation of devotion cultivated in accordance with scriptural codes.

In this Anuccheda Śrī Jīva Gosvāmī cites the next verse spoken by sage Nārada in which he gives five examples of people who attained Bhagavān by the means stated in previous verses. In verse 7.1.25, the means mentioned are vairānubandha, nirvaira, bhaya, sneha and kāma. In verse 7.1.29, the means mentioned are kāma, dveṣa, bhaya, sneha, and bhakti. In these two verses, kāma, sneha and bhaya are common to both. Vairānubandha is the same as dveṣa, and nirvaira refers to bhakti. Thus the five means are kāma, dveṣa, bhaya, sneha and bhakti. In the verse cited in the present anuccheda there is an extra means mentioned, i.e., sambandha. This makes it six. But in the next verse (7.1.31) the number five is mentioned explicitly. To resolve the contradiction between the present verse with the two earlier and the one following, Śrī Jīva Gosvāmī proposes that sambandha and sneha are not two separate means, but only different varieties of sneha. Sambandha refers to the specific sneha because of sambandha. Thus there is no contradiction.

The other thing to be kept in mind is that the gopīs, Pāṇḍavas and Vṛṣṇis are all eternal associates of Kṛṣṇa. Śiśupāla was also a doorkeeper in Vaikuṇṭha before undergoing temporary forgetfulness for the sake of the Lord's pastimes. Then how can it be said that they attained Kṛṣṇa by some specific means? Śrī Jīva replies that the gopīs, Pāṇḍavas, and Vṛṣṇis mentioned in this verse are not a reference to the eternal associates but to sādhakas who attained that position through practicing rāgānugā bhakti by following in their mood. In the case of Śisupāla it means that he gave up his temporary mood of animosity and became installed in his original position as the Vaikuṇṭha doorkeeper.

Śrī Jīva also hints that just as in the past these people attained Kṛṣṇa, contemporary sādhakas can also attain him by listening to the stories of devotees like gopīs. Therefore, one should regularly hear books like Bhāgavata Purāṇa.