May 04, 2008
It has been hard to keep up on my correspondence. It seems that the busier I get, the more work I take on. This weekend, believe it or not, I gave Bhagavad-gita classes in Hindi on both Saturday and Sunday at the Madhuban temple in Muni-ki-reti, not far from Ram Jhula. I actually proposed myself earlier last week as I really felt the need to do some direct bhakti activity or bhakta sanga. When introducing myself, I did not hide anything about my checkered (in Iskcon terms) past.

When you see Madhuban, it makes you appreciate what Srila Prabhupada accomplished. Bhakti Yoga Swami has done an admirable job of building a striking temple with beautiful deities--Gaura Nitai, Radha Krishna and Jagannath-Baladeva-Subhadra. The guest house and restaurant are modeled on the Vrindavan concept and maintain the same if not a higher standard. One of the temple’s major annual events is the Rathayatra, which they conduct not only in Rishikesh, but in Dehradun, Hardwar and other towns in the region. They are perhaps not the only representatives of the bhakti tradition (there are several Radha Krishna temples in Rishikesh), but they are certainly one of the most visible and possibly the most vibrant. 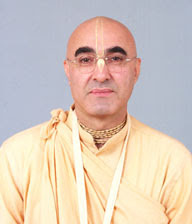 Bhakti Yoga Swami himself attends the evening program, being present at both arati and the Gita class. I was late on Saturday--I did not realize what a nightmare it is crossing the bazaar area of Rishikesh on an evening in the hot season. I ended up walking most of the way so that when I arrived Swamiji was already sitting in the Vyasasana. Even so, he got up and asked me to take his place to speak to a group of perhaps ten ashram residents and 20 or so guests.

I guess I had a lot of pent up Crusader in me after spending all this time in the Hari-katha desert of a yoga ashram. Also working on the Bhagavat-sandarbha with Satya Narayan's commentary has gotten me sharpened up on a lot of the points of difference between Shankaraites and Vaishnavas. But definitely when one is a Vaishnava in Rishikesh, this kind of self-definition is something you need—at least if there is any truth to Svarupa Damodar’s warnings about the dangers of hearing Mayavada, even when one is a fixed up devotee. And what the heck, isn’t it worth hearing some alternative to the endless “silence” and shanti shanti shanti of the locals?

I talked about the meaning of sat chit and ananda and how ananda means prema, and how prema means awareness of God's personality. Without personhood, love has no meaning.

After the first night's class one gentleman came up to me and asked me to tell him what the essence of the Gita was. I immediately quoted and explained the Gita Chatuhshloki. That inspired me to change my approach a bit last night. Though I made no special preparation, my class was much more fluent and better organized. I came early enough for arati and sang Jaya Radha Madhava. I decided to dig into a general overview of the Gita and the Gita tradition. I started by analyzing Shankaracharya's historical contributions, traditions of Gita commentary in the various sampradayas, and so on. My goal is to show the common ground that all sampradayas have as well as the areas in which they differ, and how there is a constant attempt at synthesis (samanvaya) that must be respected.

The starting point was talking about the Gita’s three divisions, which as I mentioned earlier on this blog, is a direct borrowing of our acharyas (Vishwanath and Baladeva) from Madhusudana Saraswati, which shows exactly this kind of crossing over. (As does the very fact of Sridhar Swami being our go-to guy in Bhagavata tikas, by the way.) I gave myself enough material to go on for months I am sure, for there is a long way to go before I come back to my starting point!

Bhakti Yoga Swami was pretty pleased on the whole and said that Saturdays and Sundays are mine for as long as I want to come. So it is all very ironic that here I am the big Sahajiya and now I am regularly speaking in front of Srila Prabhupada's statue in a temple that is run by Kirtanananda Maharaj's disciple. But believe me, from my point of view, it is lovely to say "Jai Gaura Nitai!" and hear an echo.