November 12, 2007
I have quite a bit of work to do before leaving for India. I am trying to juggle several tasks, and when that happens, I usually short-circuit and do the least urgent thing on my program. And that, for me, is the Grantha Mandir. Since I spent the whole weekend going through the first thirty pages of Satya Narayan Dasji's Bhagavat-sandarbha, which has quite a number of references to Sanskrit grammar texts, including Jiva's Harināmāmṛtam, and since it seems I am going to be spending time teaching Sanskrit in India, I though I would try to do a bit of Harināmāmṛta-vyākaraṇa.

In Nabadwip, back in 1976 or thereabouts, I started studying HNV with Kunjabihari Brahmachari at the Devanananda Gaudiya Math. I did not last very long. I have already gone past the point that we reached after several lessons. I was memorizing the verses and sutras with him. But since my Bengali was not very good and the Brahmachari's English was worse, we did not make much progress. I can still remember him trying to explain the word nimitta to me (Sutra 1.44 at the beginning of the Sandhi-prakaranam), which I think is about as far as we got.

Even so, I enjoyed it then and I am enjoying it now, and not for exactly the reason Jiva states at the beginning.

Grammar is like a great desert, and the devotees who are suffering from the blazing sun of material existence are thirsty for the water [of bhakti]. So, may they all drink deeply of this nectar of Krishna's holy names, and then dive into it over and over again.

The word jivanam here means water, like in 10.31.9, tapta-jivanam, water for those who are suffering from heatstroke.

This is no doubt true, but what I like is the playfulness and humor that is apparent right from the very beginning, when Jiva starts creating terms (saṁjñā). For Panini, the father of Sanskrit grammar, the object is brevity and efficiency. So he invents one-syllable words like ac, hal, al, etc., that when combined create a kind of code language. Later grammarians like Kalapa tended to translate Panini back into comprehensible Sanskrit. So whereas Panini uses at to designate the letter a, Kalapa uses a-kāra. Jiva goes a step further and changes it to a-rāma.

If they can just reduce the number of syllables, some grammarians celebrate as if they had just had a son. We make a mockery of them by adding more and more names of Krishna. (HNV 1.2)

The conceit of using Krishna's names is not to simplify the grammar or make it more efficient (I don't think anyone could beat Panini at this game); Jiva's goal is actually to be playful. I mean, Vamana for short vowels and Trivikrama for long ones, you don't think that's funny? Or Hara (Shiva, god of destruction) for elision, and Virinchi (Brahma, god of creation) for transformation (because he takes one thing, i.e. Krishna's energies, and transforms them into the material universe? And Vishnu, who appears as an avatar, as "insertion." (Sutras 1.38-40).

Vowels are Sarvesvaras, because they stand alone, and consonants are Vishnujanas, because they depend on Sarvesvaras to be pronounced and even have the Sarvesvara inherent in them. Jiva here keeps some similarity to the customary grammatical terms (svara, vyanjana), but at the same time reminds us that language, life itself, is the interplay, the lila, of God and his devotees.

Vishnujanas are subdivided in various ways, and this often leads to sutras that made me guffaw then and still raise a chuckle in me. viṣṇudāsa-harigotrāṇi vaiṣṇavāḥ. "Vishnudasas and Harigotras taken together are called Vaishnavas." (1.30)

The point, being I think, that bhakti is not meant to be uptight. It's not about the hot sun in the desert, but about drinking deep of the water of madhura-rasa and diving into it. So Chant, dance and be happy! Hāsya is madhura-rasa's sister. The word rasika means both "connoisseur of the rasas" and "fun-loving joker." Look at Dāna-keli-kaumudi, Dāna-keli-cintāmani, Vidagdha-mādhava, Camatkāra-candrikā. We like Krishna because he is having fun; he breaks the rules; he hangs out with people like Madhumangala and Kundalata. He is a dhira-lalita-nāyaka.

Life may be serious business, with suffering and evil at every turn, but at the core, in the depths of our being, Krishna is having a good laugh with Srimati Radharani. Surely, then, Vaishnavism is not about being stuffy and self-righteous!

Krishna, while displaying his artistic expertise by drawing dolphins and other amazing figures on Radhika’s breasts in front of her friends, caused Radhika to close her eyes in embarassment by talking of the previous night’s lovemaking in audacious terms. In this way, playing in the forest bowers, Krishna made the most of his adolescence. (BRS 2.1.231) 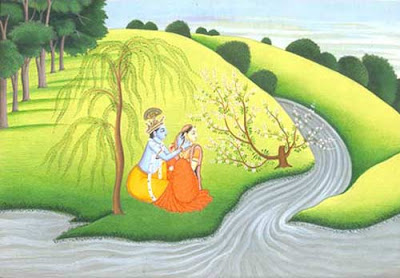 Anonymous said…
"I mean, Vamana for short vowels and Trivikrama for long ones, you don't think that's funny?"