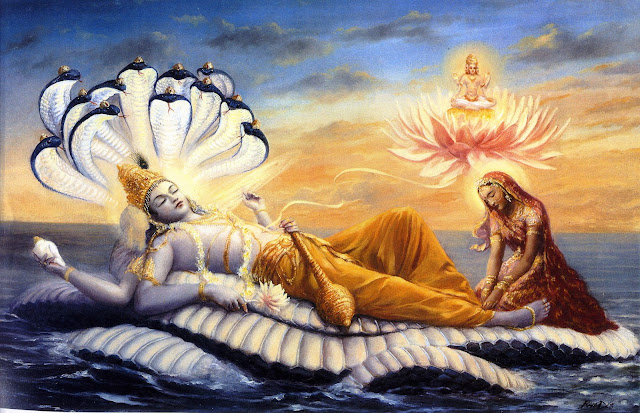 This is a discussion of the fourth kind of the nava-vidha bhakti.

Parameśvara makes a statement to this effect in the Viṣṇu-rahasya:


O Devarṣi, the yogīs engaged in meditation are not able to satisfy Me as fully as those engaged in kriyā-yoga. By performing kriyā-yoga, a dhyāna-yogī can also attain yoga.”

The word yoga, appearing at the end of this sentence, means samādhi.

[Now we turn to the next item on the list.]

In the term pāda-sevanam the reference to Bhagavān’s feet indicates reverence and devotion [and not that only the feet are to be served]. This implies that service is meant to be performed with an attitude of reverence. Service is performed in accordance with time and place and is known as sevā, paricaryā and other synonyms.

This service is described by King Pṛthu in his prayers to Śrī Viṣṇu:


The ascetics’ ever-increasing taste to serve the lotus feet of Bhagavān immediately cleanses the impurities within their minds accumulated over unlimited births, just as the River Gaṅgā, which originated from the toe of Bhagavān, also washes away sinful desire. (SB 4.21.31)

“The ascetics” (tapasvinām) refers to those who have experienced the pangs of material existence. “Impurities” (malam) refers to the desires accumulated within the mind. Bhagavān’s feet are specifically endowed with the power to purify the mind from all such desires, as shown in the verse by the example of the River Gaṅgā.

In the beginning it is not easy to just engage in singing and remembrance. Especially remembrance is not possible when the mind is agitated with various material desires. Therefore, doing service helps to utilize one’s energy to purify the mind. As one continues doing the service, one gets a taste for it. That helps to focus the mind on Bhagavān.

Elsewhere, Śri Nārada advises that a renounced spiritualist should not engage in any projects, nārambhān ārabhet kvacit (713.8). Śrī Kṛṣṇa also says that He likes a devotee who does not take up any project, sarvārambha-parityāgī (Gītā 12.16). Jīva Gosvāmī, however, advises that for purifying one’s heart one should also engage in physical sevā. The advice of Nārada and Kṛṣṇa implies that one should not become absorbed in projects for material gain.

Śrī Jīva puts two conditions on service, ruci and śakti. If one has no taste for the service, then it will be a struggle. If there is no power or śakti, be it physical, mental or financial, then one will become dependent on others.


Sevā is Perfect in Itself


O Lord, O Hari, I do not covet any boon other than service to Your feet, which is the highest benediction aspired for by those who have taken a vow of poverty. For what person of wisdom, having worshiped You, the giver of liberation, would rather request a boon that perpetuates bondage of the self? (SB 10.51.55)

"Those who have taken a vow of poverty" (akiñcanā) refers to those who are devoid of all desire, including the longing for liberation. This is because once having worshiped Bhagavān, who would choose to relate to Bhagavān simply as an entity that awards liberation? In other words, who would take shelter of Bhagavān with the view that His appearance is only for the sake of offering liberation? The word "rather" (varam) is an indeclinable adverb, and is used when something is cherished a bit more. The question is thus, Who would request a boon that is nothing but bondage for the self?

From the previous anuccheda one should not think that service is only a means to purification of heart that leads to remembrance. Service is a complete act of devotion and does not depend on anything. Service indeed is the natural outcome of love. Therefore, perfected devotees pray for service. This is the essence of Mucukunda’s prayer. Service can also be done with a motive. That is despised by a real devotee, an akiñcana-bhakta.

The word varam has various meanings. The most common meaning is a boon received from a deity. It also means the best. But as an indeclinable adverb it means a little desirable (Amara-koṣa 3.3.173). Sṛī Jīva takes the second occurrence of varam in the verse as an indeclinable and thus implies that any boon other than selfless sevā to Bhagavān is not desirable to a devotee.


The Pure Devotee Desires Only Service

In the next verse King Mucukunda said:


Therefore, O Bhagavān, rejecting all blessings associated with the qualities of sattva, rajas and tamas, I approach You, the Supreme Person, who are pure consciousness, free from designation, beyond the three guṇas, the non-dual Absolute. (SB 10.51.56)

The implication here is that because Mucukunda obtained the Absolute as the supreme object of service, he realized Bhagavān’s personal feature as the embodiment of existence, consciousness and bliss.

Bliss of service to Bhagavān is superior to every thing which is a product of three guṇas. It is superior even to brahmānanda, the happiness of realizing Brahman. Therefore, a devotee desires nothing but service in love.

DISCLAIMER: All the posts related to Bhakti Sandarbha are not the final product. This version will be refined by other readers and editors, including Babaji himself. Please do not use this material without reference to this disclaimer. This material is copyrighted by the Jiva Institute.