Bhakti Sandarbha 270-272 : Kīrtana in the Kaliyuga 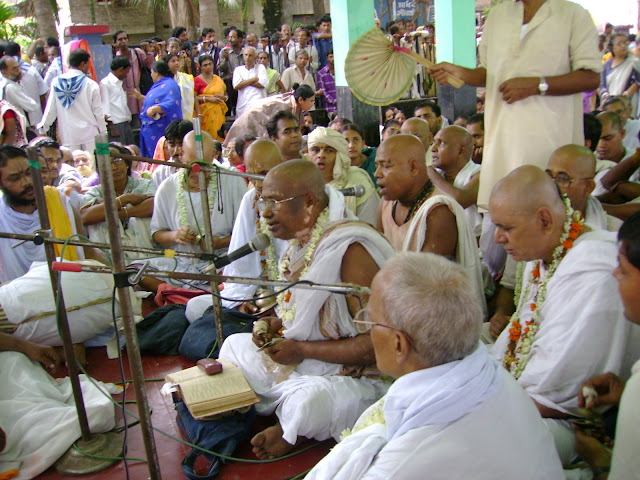 
The Importance of Kīrtana in Kaliyuga

This devotion to Bhagavān in the form of kīrtana is unlimitedly merciful to those wretched living beings deprived of wealth, prestigious birth, admirable qualifications and praiseworthy accomplishments. This is understood from the Vedas and the Purāṇas. Wretchedness is a natural condition in kali-yuga, as stated in the Brahma-vaivarta Purāṇa:

Therefore saṅkīrtana, appearing amidst the naturally afflicted people of kali-yuga, easily confers upon them all the results derived from the practices prominent in other yugas and thus makes them perfect. For this reason Bhagavān is especially pleased by saṅkīrtana in the kali-yuga.

As stated in the Cāturmāsya-māhātmya of the Skanda Purāṇa


In this world singing about Śrī Hari is the best austerity. In kali-yuga especially, one should perform kīrtana for the pleasure of Śrī Viṣṇu.
तदेवमाह (भा. १२.३.५२)—


What is attained in satya-yuga by meditating on Viṣṇu, in tretā-yuga by propitiating Him with elaborate sacrifices, and in dvāpara-yuga by temple worship of the deity, is attained in kali-yuga by singing about Hari. (SB 12.3.52)

In other words, whatever is achievable in satya-yuga and other ages by the respective methods prescribed in those ages, can be attained in kali-yuga simply by singing about Hari. Elsewhere also it is said:

From the descriptions found in Purāṇas it is understood that people in earlier yugas had a much longer life, were austere, self-controlled, religious, and renounced. Thus they could engage in severe austerities or religious acts such as yajña. In the kali-yuga people generally lack the qualifications of those in previous ages. One advantage of this is that people have no reason to be proud. Humility is the basic qualification to do kīrtana. It is naturally possible in the present age. Thus one can get all the benefits of religious deeds executed in previous ages merely by doing kīrtana in a humble mood.

Unfortunately one can be proud even without having good reason for it, as the popular adage goes, “Even a pauper is proud of his penny.” This disqualifies them from doing kīrtana. Either they do not take to kīrtana thinking it to be a lowly act or they do it for a show. Such proud people do kīrtana only to impress others and not as an act of devotion. This is also good because at least they do not engage in some mundane singing, but it does not yield the desirable result of love.

The verse from Brahma Vaivarta Purāṇa says that pious activities cannot be done perfectly in kali-yuga. The sense is that any religious act done in kali-yuga is incomplete without kīrtana. Therefore, kīrtana must accompany them to bring the desired result. But kīrtana should not be considered on the same level with any another religious act. It should be known as superior to everything else and thus done to bring perfection to these other inferior religious deeds.


The Kaliyuga is Glorious Because of Kīrtana


Those who are cultured, who can perceive virtue within everything, and who thus extract the essence of all things, extol the merits of the age of kali-yuga, in which one can attain everything desirable merely by singing the names of Bhagavān. (SB 11.5.36)

In this verse, “those who can perceive virtue within everything” (guṇa-jñāḥ) refers to those who know the merit of the kali-yuga in terms of the widespread propagation of kīrtana. Therefore they are known as sāra-bhāginaḥ, or those who draw out the essence of all things, because they are not concerned with the defects of the kali-yuga. It is for this reason that they extol it. The sage Karabhājana describes the virtue of this age in the second line of the verse: In this period of the creation cycle when saṅkīrtana is widespread one can attain everything through its practice alone, without the help of any other discipline. This means that one can attain everything that is gained through  thousands of other methods such as meditation in satya-yuga.

The result that one attains by doing spiritual practice for thousands of years in other yugas can be attained in a short period of time in Kaliyuga by doing kīrtana. Indeed one can attain much more, i.e., the pure love for Kṛṣṇa that was not know even to great sages in those times. Therefore, those who have an eye for virtue praise the Kaliyuga, despite its being full of numerous vices and being considered the lowest of all the yugas.

There is a popular story of unknown origin that I have heard about the glory of kali-yuga. Once there was a meeting of great sages who discussed the greatness of the different yugas. There was no consensus about which yuga was the best so they decided to approach Vyāsadeva and take his opinion. They all went to his residence at Badarīka Āśrama in the Himalaya.When they went there he was taking a dip in the river Sarasvatī. Each time he ducked his head, he would come up muttering, “Kali is great.” When he came out of the water the sages asked him the reason for his statement. Then Vyāsa explained them how Kali is the best yuga because one can attain the highest goal of life by mere kīrtana.

It may be noted that although kīrtana is available in every yuga, it only becomes popular in the age of Kali. Śrī Jīva explains the reason for this in the next Anuccheda.


In Other Yugas People Do Not Put Faith in Kīrtana


Therefore for human beings wandering in this material world, there is no benefit higher than this, from which one attains supreme peace and cessation of the cycle of birth and death. (SB 11.5.37)

“Than this” (ataḥ) means [that there is no benefit higher] than “the singing of Bhagavān’s names.” The “From which” (yataḥ)  means “from this singing” [one attains supreme peace]. “Supreme peace” (paramāṁ śāntim) refers to a state described by Bhagavān Kṛṣṇa in these words: “When the intelligence is firmly fixed on Me, it is known as peace or quietude (śama).” (SB 11.19.36) According to this definition, the supreme peace here means that [through ] one attains the pinnacle of fixity in Bhagavān, which is unattainable even by meditation and other methods, and as a concomitant result, one’s material bondage is also destroyed. Thus even the people of satya-yuga, who were established in meditation, could not attain such fixity in Bhagavān.

In the Skanda Purāṇa it is said: “In the kali-yuga great devotees always perform kīrtana.” In other yugas, Bhagavān, who bestows special grace only upon the meek, did not reveal the process, or the glory, of kīrtana, which is the cause of such fixity in Him. According to the above statement from the Skanda Purāṇa, the reason why Bhagavān did not promulgate kīrtana in other yugas was because the people of those times had the ability to follow the processes recommended for their respective ages. Consequently, the people of those ages, who were fit for meditation and other practices, would not have considered the mere movement of the tongue and lips as much of a spiritual practice, and thus they would not have faith in kīrtana.

It is the nature of ego to take a challenge. It feels gratified by doing adventurous deeds. When people have physical and mental power it is not easy to be humble. Their ego cannot be satisfied by doing some very simple spiritual action such as kīrtana. They cannot even believe that kīrtana is a spiritual act. Therefore, kīrtana was not made popular in earlier yugas. As said before, people in Kali do not have physical and mental capabilities like the people of earlier yugas. Thus they can put their trust in kīrtana.