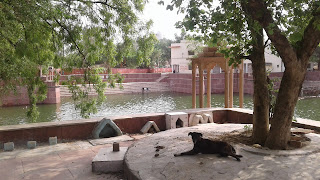 It rained during the night quite heavily. I had been sleeping on the roof in the open, so I had to escape downstairs where most of the other guests and some ashram devotees sleep. The air was cool and the fans running so I did not sleep very well. This was the first time that I slept there.

An alarm went off, a rather gentle one, at about 4.30. I groggily struggled to stand up and gather my things, thinking I would go somewhere back to sleep as soon as I could.

Suddenly I saw Binode Baba standing at the edge of the veranda with a couple of disciples, putting a plastic shower cap on over his dreadlocks. Then the entire group walked out the front gate to take bath in Priyaji Kund.

Last time I was here, nobody took bath in Priyaji Kund. Even thought the Braj Vikas Trust had done a nice, tasteful renovation of the kund a few years ago, it face all the typical problems of Braja waterbodies. The water level was low, the water was stagnant and full of algae, and people and the wind had given it an topping of plastic bottles and empty chip wrappers.

Over the last year, as you can read here, Yogi Adityanath, the CM of UP had Barsana declared a "tirtha sthali" and decided to celebrate Lath Maar Holi with some members of his cabinet and other dignitaries. For that, a big sum of money was sent to Barsana for different projects.

One of those projects was to again make improvements in Priyaji Kund. That included some upgrading of the BVT's work, making a cement concrete road around the perimeter, painting the walls with traditional Braj-style wall paintings and things like "Jai Radhe!" and, most importantly, a tube well that is used to keep the kund brimming with water.

The result has been dramatic, especially here in the hot season. From dawn to dusk, swimming pool noises reverberate through the neighborhood. Bikes and cars are parked in front and boys and young men enjoy the pleasures of bathing in the clean waters of the kund. They also appear to have stocked the kund with fish, I felt something nipping at me while I took my dip and I thought it was a goldfish I saw.

At night, the kund quietens down, but they have put enough soft yellow lighting to make the kund swimmable. I have already been a couple of times, because I like swimming. I am not that strong, but I took great pleasure in doing a few laps of breaststroke.

I went last night between the parikrama and the kirtan, around 7.30, when there was pretty much nobody around. There are four ghats, and somehow on my return lap, I took a wrong turn and ended up at the wrong ghat. Without my glasses I am as good as blind and especially in the dim light. All the ghats look basically the same from the water level, so when I went looking for my clothes and bag, they weren't there.

I sighed. Double checked and then, in my wet underwear, climbed the steps. I saw two young men and sadly announced that my stuff was gone. One of them walked away and came back a few moments later. He had picked up on what happened and was able to point my things to me. I was very pleased, I said, "My faith in humanity has been restored, and especially my faith in Brajbasis."

He told me his name, Jitendra Sharma. He is a priest at the Ashtasakhi temple. As I went and gathered my things, I said aloud, "Jai Jitendra Sharma!"

There was a sadhu at the top of the steps who laughed and said, "Why are you glorifying a human being. Glorify God."

I said, "Baba, I like the God that comes right up to me and gives me mercy. And so I glorify the form he takes to give it."

I think the Priya Kund model is really, really, really good. We have a big problem with the kunds in Vrindavan. Govinda Kund, Davalana Kund and Moti Jheel have all been renovated in the past decades, and mostly done very nicely and aesthetically. Davanala Kund especially has a very nice feel.

But all these kunds suffer from the same problems that Priyaji Kund suffered from. The nearby Prem Sarovar and many others are in the same predicament. Back in the seventies, kids from the Bhaktivedanta Gurukula would go swimming in Davanala Kund as well as the Yamuna. That is a thing of the past. The Braj Foundation had to abandon the Govinda Kund waterless because the use of submersible pumps in the area had so lowered the water table that things could not progress.

One thing to note is that if the bottom of the pukur is not concretized, a full waterbody helps to refurbish the water table. So it makes more sense for water to fill the public waterbody and replenish the water table so that water access is improved for everyone. It is, in other words, a method of water harvesting and recycling.

But how much life the "swimming pool" brings to the town itself. The saints bathe in their way, as the saints always did, immersed to the waist at the end of the night or at dawn and singing hymns to their gods, and during the day the children come and play. And the National Green Tribunal has said that facility for cattle also has to be given, which is correct.

There are a few problems. As always the main thing is maintenance. There are four ghats and I already noticed that one of them is being used for open defecation. There is a dharma shala of sorts for itinerant sadhus in one corner of the kund, maybe they are the culprits, but at any rate it is certainly not desirable. I did not see any toilet facilities, so that is clearly something that needs to be added, preferably to one side.

The next is the eternal problem of garbage. There are bottles floating in the kund already and potato chip wrappers, and you all know the drill. There needs really to be some kind of public person who will interact with the public to keep them aware of the need for putting garbage in the right place.

But aaah, there is no arrangement for garbage. It seems obvious that one or two cleaners should be on the job all day long in order to keep the environment spotless at all times, but there has to be garbage cans. Monkeys are a problem here too, though not as great, even though garbage is a great attracting force for monkeys. Nevertheless an intelligently designed monkey-proof waste disposal system absolutely must be installed.

These are Braj's youth and its future. The kund provides a very good opportunity to introduce some civic values, in particular how they keep the common areas, like this one, in optimum condition for everyone to use and enjoy. It is called mamatA, the feeling that something is mine, even though really it isn't.

"I love this kund, I love swimming in this kund. I hope other people can get the same pleasure from it that I get, so let us keep it clean and glorious!"

But instead of showy cleaning drives, what is needed is to nip the whole business at the source and not let the eyesores of ubiquitous garbage become normalized and unseen. So you have to start by showing it.

One last thing that I observed also is that algae is naturally starting to form in the water, though it looks like a good one. The steps are starting to get that slimy covering about three or four steps down. This should be regularly tended too, as slippery steps are a very likely cause of accidents.

I should hope that the kund will remain free from accidents, but if the animator type of responsible for the kund doubled as a lifeguard, that might be the optimum concept. 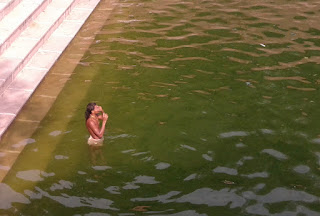