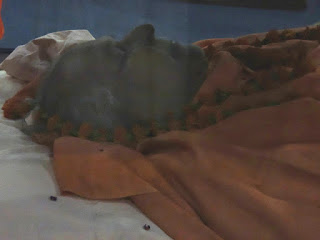 I found this unposted draft dated from around the time that Swami Veda left this world. I am posting it now, although I understand why I left it in the drafts for so long. (7-21-2018). Swamiji answered me that he hoped to attain absolute liberation or kaivalya at the time of his death. As a Vaishnava I was not overly enthusiastic about such a destination.

Three years later, I am only now beginning to understand how much affection I had for Swamiji and how much his teachings and practices affected and influenced me. May he rest in peace, and may the good he did continue to benefit the world. He was a dear friend and guide.

I am going to Rishikesh for the first time in three years in a few days, and have been having dreams of Swamiji. In meditation I often think of him as I do nāḍi-śodhana, remembering how he sat for hours doing this practice in the meditation hall at SRSG, trying hard to keep his body alive for a little longer so he could continue his service to his disciples and complete the Yoga Sutra work he was doing.

To one who has received the power of Gaura's merciful glance, liberation appears like hell, the heavenly worlds like so many pies in the sky; the unconquerable senses become like snakes with the fangs removed, the universe is filled with joy everywhere, while gods like Vidhi and Mahendra are seen as of no more significance than insects. I praise that Gauranga Mahaprabhu. (Caitanya-candrāmṛta 95) 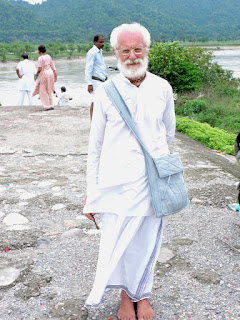 Me at the Haridwar ghat where Swamiji was put into jala-samadhi.

Prem Prakash said…
Your loving feelings for Swamiji come through your words. How sweet. How wonderful. Here's hoping your trip to Rishikesh is auspicious.
Tuesday, 24 July, 2018