8. Confessions: An experiment that fails

1. Prologue.
2. Setting the scene. The saga of the Paundraka Vrindavan Today.
3. Staking out the high ground. The frequentations of swans and crows.
4. Confession, a religious act. A concealed provocation.
5. A profession of love and respect for Babaji.
6. Aiming again at the high ground, and a concern troll
7. Bhakta Demian challenges me to confess more.


When I finished reading Demian's twelve points, I decided to remain mum for the reasons I have already given previously. But nevertheless, I continued to think that surely I can find a way to soften his heart and to come to a position where he will see what the character of a devotee is like. So I thought that I should praise him first. The letter that I posted on Facebook was also posted on the thread on the Paundraka Vrindavan Today because I wanted Demian to read it.

Now, Demian's answers are given below and you will see that he (naturally) reads the worst possible motivations into what I said. And if he has recognized that we are at opposite ends of a spectrum of some kind is not without merit. But everything I wrote below was done sincerely, including the two points I make in the final paragraph. But I will be responding to the demand for confession later. For now, let me begin by pointing out some of the things that I see as positive in Demian Martins, and also things for which I feel gratitude to him. 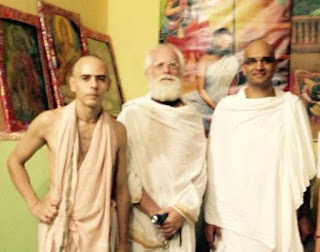 I am truly honored that someone of such great distinction as Dr. Demian Martins, PhD, has decided to consecrate so much of his time to revealing to the world this humble servant's multiple flaws and sins. As Lord Jesus said, "All have sinned and fallen short of the glory of God." To be reminded of this with such force on a regular basis is truly helpful to my work of introspective self-examination and protects me from multiple dangers such as my incorrigible desire for fame and honor.

Dr. Martins' commitment to the scriptures of the Vaishnava sampradayas and in particular to Baladeva Vidyabhushan, is a marvel for all of us and I pay my unlimited obeisances to his lotus feet. It makes me feel very proud that he is also associated with the Jiva Institute and that Mahanta Srila Satyanarayana Dasa Babaji has given him his backing and helped publish numerous manuscripts that Dr. Martins has discovered and translated into English.

And of course, this is only the tip of the iceberg of Dr. Martins’ unlimited virtues. He is also a yogi and a committed follower of the brahmacharya-vrata as well as a disciplined ascetic who exemplifies the title tapo-dhana.

For me to actually live in the same building as such a great scholar is a daily source of inspiration and to occasionally have his darshan and to be able to pay my obeisances to him is one of the great fruits of my Braja vasa.

Not only that, but I am a direct beneficiary of Dr. Martin's hard work in collecting digital copies of a great number of the printed and manuscript texts of the Vaishnava tradition, some of which I use almost every day (such as the multiple commentary edition of the Bhagavatam). Indeed, not a day goes by when I do not feel gratitude to him for his seva.

Despite my incorrigible sinful proclivities and my hypocritical wearing of Vaishnava dress, by the grace of the most merciful Vaishnavas -- Srila Prabhupada and all my gurus, Sri Lalita Prasad Thakur, Srila Bhaktivinoda Thakur, Bipin Bihari Goswami Thakur and all my disciplic succession going back to Ramai Thakur and Jahnava Mata and Dayal Nitai Prabhu, the savior of the most fallen, and by Kaliyuga Pavanavatar Sri Chaitanya Mahaprabhu, and also by the grace of the the sadhus and the Brajvasis, I have been given a place in the Holy Dham.

Not only have I been given a place here, but I have also been given the association of many great devotees residing here, what to speak of other mahatmas like Binode Bihari Baba and Ananta Das Pandit Baba. Moreover, by their grace, I have been given a little service to the Dham, to the Vrajavasis, and to the literature of the Goswamis. For a sinner and offender like myself, it is beyond my capacity to understand how such good fortune should have befallen me. I spend my days thanking Srimati Radharani and Bhakti Devi for having overlooked my flaws to give me this opportunity.

And now my joy knows no bounds that I also have someone of Demian's stature, a scholar, a saint, a devoted teller of the truth, to commit himself to my purification and to enhancing the little service that I do.

In return, I hope that Demian will soon find a pure devotee Brijvasi guru to initiate him into the path of prema-seva and to thus perfect his his own service by attaining the ultimate goal. May his heart never be sullied by malice. Jai Sri Radhe.

O Brother! Stay each night at the foot of a different tree. Beg for food in the villages. Freely drink the Yamuna waters. Make yourself a nice shawl from torn and discarded cloth. Consider praise to be a most horrible poisonous cup and lowly condemnation to be nectar. Worship Radha and the Player of the Flute with relish. Never leave Vrindavan. (Vrindavana Mahimamrita 1.48)


If I didn’t already know that anything coming from your mouth has no value, I could have even believed this. As they say in Brazil, “Let the ignorant buy it.”

“Even if he has seen an abominable act being performed before his eyes, a fool becomes appeased by conciliatory words.” (Pancatantra, 3.49)

It does not really matter what you think. The world has heard your praises from my mouth.

Are the praises true? Yes, they are.

But of course, I know that because of your humble Vaishnava character, you are obliged to deny them and think of it all as atistuti.

But at least I have done my work of acknowledging your glories and therefore your credibility.

And this only strengthens your mission of lowering me in the world's estimation. Have I not served your purpose?

And his final word:


Whether your praises are true or not is not relevant in this discussion. As I predicted, to me this “response” falls in the “twist” category. Both of us know very well how feigned, forced and artificial you are being here, and both of us know very well that in real life the only thing you want to do is to blast the hell out of me for breaking all records in junior impudence towards a senior, as you often yell at me and at others around. Wake up. You are not a gurukula master anymore and people around you are not your gurukulis. If you are so obsessed to be respected, you could try to stop abusing others. Unfortunately, as you spent your youth abusing little kids and nobody has taken you to task, you take for granted that you can go on undeterred.

No mission is required to lower you in the world’s estimation. You have already done it in a much more efficient way than anyone else could ever do.


Sweet words, but not without truth. Let us say I tried, but it was an uphill battle. So let's leave this meditation for tonight.
Demian Martins