"...each and every one of Gauranga's limbs" 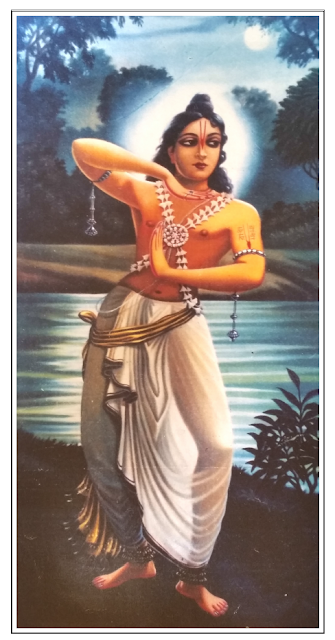 I am trying to gather up Gadadhar's writings and put them all in one place so that we can see what can be done about making them available. The above picture was painted by Gadadhar himself and is on the cover of his translation of Gauranga pratyanga stava raja.

The title means, "The topmost prayer, which describes each and every one of Sri Gauranga's beautiful limbs." It is the prayer he sings three times a day as the cornerstone of his worship for several years now. This picture is the meditation that accompanies this prayer.

Gadadhar tells me he is tired of painting, and indeed I have watched him. He is tireless. The whole time I was there he was retouching the hem of Nityananda's shawl. He complains about and I can understand why. He likes the excitement of meditating directly on Gaura, indeed of being with Gaura. If you like, it is a kind of prema-vaicittya. He has Gaura right in front of him and he is complaining that he doesn't get to serve Gaura in the way he wants, but he does the work anyway. He gets the hem right.

At any rate, the above painting is one of his best, in my opinion. It has the mark of immortality, which is the sign of good art, whatever the style or technique.

I think I can meditate on it and feel how Gadadhar feels about Gauranga. I challenge you to do it.


I thought I would add some comments I wrote on the FB thread:

I was just talking to some of Babaji's new students here at Jiva about darshan. They wanted to know which temple to go to for arati. I kind of said that they are all good, but specifically mentioned Radha Damodar, Radha Raman, Radha Vallabh and Banke Bihari.

Some chirped up that it is too crowded at Bihariji, we can't see the deity at all. So I said, then you look at the people. And watch them stare at Bihariji. Look at their faces. They are practicing what is called darshan.

Oh my friend!
Smiling, in his famous triple-crooked stance, with his big crooked glance.
With newly blossomed lips cast on his flute
so bright in the moonlight
This form of Hari called "Govinda," is just nearby, next to Keshi Ghat.
So if you want to find pleasure in the company of your friends,

And of course the same applies elsewhere too.

So I explained darshan as the same as trāṭaka. My South Indian yogi friend Swami Vachananand (Shwaasa Guru) teaches the Lingayat practice of trāṭaka on a handheld linga, When not engaged in the practice, the linga hangs around the neck of the sadhaka and is the sign of being initiated. It is indeed the main practice of the Lingayats. Indeed, I remember Swami Veda discussing the practice with Swami Vachan.

I recently started doing the same kind of thing with my Giridhari, holding him in my hand and looking at his painted face. If you are on a good talking relationship with your Giridhari, it can be quite electric.

The point, I guess, is that in human life, looking someone long in the eyes is not often done, even in close relationships. But love sort of means being able to look at another person in the eyes and not feel he or she has to turn away.

Bihariji is the king of darshan because of his eyes. Radha Raman also. Radha Vallabh is more mysterious, his eyes are entirely black. Radha Damodar has a later style of deity. The original 16th century murtis are gone and to be quite honest, however enchanting their replacements, they don't quite have the same charm. If there is an offense in judging comparative beauty of Thakur images, may I be forgiven. Radhe Radhe.

But I think that ultimately it is in the eyes. 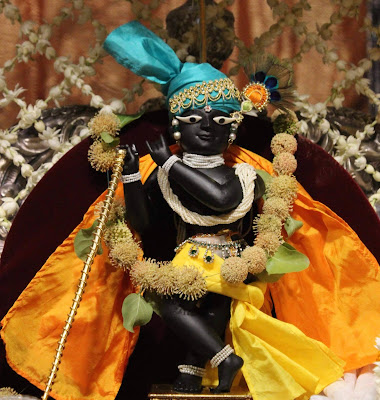 Prem Prakash said…
I've got to disagree with you, Jagananda dass, trakata is not the same as darshan. Trataka is a practice for developing vairagya and siddhis, not bhava.
Sunday, 11 March, 2018

Prem Prakash said…
I'd like to ask an open question of you, Jagadananda dass, as well as your audience.

In so much Vaisnava art, the men are depicted with virtually no body hair. Why? I understand the depictions of Krishna, Balarama and the gopas as pre-adolescent boys would lack any hirsute qualities, but why are grown men not displaying attributes of what might be considered signs of their masculine virility?

Maybe this is simply a cultural phenomenon, I really don't know. As a guy who appreciates a good beard on his own chin, I just wonder.