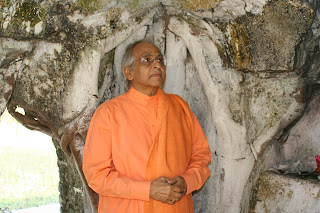 I just received a call from Adhikari in Rishikesh that yoga master 108 Sri Mahamandaleshwar Swami Veda Bharati Maharaj has left his body. I hereby offer my condolences to all his disciples and followers, many of whom have become good friends over the years.

Swamiji was a good friend and guide to me. I first became associated with him in 2007 when I joined the SRSG Gurukula as a teacher of Sanskrit. It is unfortunate that I never knew him earlier in life. Those who did knew him as a tireless teacher of meditation and Indian yogic culture. He was, in fact, an extraordinarily learned person, not only in traditional branches of knowledge, but in Western scholarship as well. He was a magnet for scholars of Sanskrit and Hindu shastra, especially those who came from the West, and I got to meet many of them at SRSG -- David Frawley, Bettina Boehner, Chris Chapple, Mark Singleton, to just mention a few off the top of my head.

When he was still in fairly good form, Swamiji would have very lively meals in the evening, usually with special guests, mostly very interesting ones. Swamiji would lead the way with much boisterous story telling. Over the years I met his son and daughter, grandchildren, as well as hundreds of his disciple children. It was a good and interesting company. Swamiji's evening meals were called the "Rishikesh Nightclub" and they always finished with Swamiji reciting, like a maha-mantra, the various choices of beverage with which the meal could be concluded, including cinnamon from Malaysia and cocoa from Trinidad.

At first I was primarily a Sanskrit teacher, but Swamiji approved of my meagre Sanskrit skills and so asked me to work on a number of projects, including several old translations that had been sitting around and just needed finalizing. Sanat-sujatiya and the Gita in the Vasishtha Ramayana were two of them. Swamiji also confided me with the Yoga-tarangini work. He also sent me a couple of times to represent him at conferences at the Ramkrishna Mission in Kolkata and Punjab University.

But the biggest project was redoing the first volume of Yoga Sutra, in the hope that the copyright to it could be wrested from the Himalayan Institute. The new volume was published privately, and it looks pretty good. Swamiji naturally wanted the other volumes of YS to be at the same standard, which may now never happen.

Nevertheless, I finished going through the third volume just before leaving Rishikesh a couple of weeks ago and so I am quite confident that this volume will be up to the standard. Swamiji had already started going through Volume II to revise that one also. And there are notes and so on for Volume IV. I tried to persuade Swamiji to concentrate on the sutras of the fourth volume and to leave aside the multitude of appendices he wanted to add to other volumes. Swamiji really wanted to present the Yoga Sutras authoritatively, encompassing the entire Sanskrit commentatorial tradition and highlighting practices or interpretations as given in the oral tradition, as he had received it from Swami Rama and others in his many years of contact with the world of yoga.

Although these projects will need to be carefully cared for, may Swamiji's desire to create an atmosphere where serious minded yogis -- particular those from the West -- can study and practice without distraction or disturbance and make real progress towards the higher reaches of yoga, namely Samadhi -- be fulfilled.

Swamiji also has, he has let it be known, a volume of reminiscences of his relationship with Swami Rama, which he wanted to be published posthumously. One of the reasons that he wanted it published posthumously is because there are many incidences in these memoirs that have a miraculous flavor to them, and moreover would seem to show his guru's special favour on him. But this was characteristic of Swami Veda. Although he was proud of his career, of the special circumstances of his early life and the role he played in the Caribbean with the Hindu diaspora there, and the winding road he took that led him to create Swami Rama Sadhaka Grama and the Gurukula project in Rishikesh, he always kept an attitude of humility towards everyone.

Swamiji made a point of not allowing his pictures to be hung in any official location on the ashram grounds, though some individuals naturally kept his photo on the walls of their room. But Swamiji had a horror of the lavish worship and cultish mentality that so many gurus promote. He wanted his disciples to understand the proper relationship of disciple to guru, but he refused to use such gross techniques to manipulate their minds. There are, of course, certain superficial advantages to the cult mentality, and had he so wished he could easily have employed those techniques, but he refused on principle.

Though I have written a few things about my experiences with Swami Veda on this blog and elsewhere, in the last few months that I spent at SRSG Swamiji called me to his room a couple of times. With John and Souresh present he made me promise to finish the Yoga Sutra project (and a lot of others that would require too much commitment from me). Then on another occasion -- just when the Yoga Tarangini came out -- he again exacted the same promise from me.

Where the Yoga Sutra is concerned I think that if I am to continue with the project even now, that we could follow the same technique that Swamiji used and then make use of recorded lectures and notes to supplement them to come up with something that would be close to his standard and his teaching intentions. It would, of course, require the contributions of all of Swamiji's longtime associates and disciples, who were most likely to have received the grace of knowing his lesser known secrets. Swamiji was proud of his connection to Swami Rama and the "oral tradition" of Himalayan yoga. This is where I would no doubt be less helpful.

I hope that all these projects will be maintained and carried out in the way that he envisioned and that his disciples will be empowered to carry his mantle and continue to lead the way and spread his legacy and that of the Himalayan tradition.

Many years ago, Swamiji wrote books about death and preparing for death, Meditation and the Art of Dying. He also cited the example of Grandfather Bhishma from the Mahabharata and his iccha-mrityu. Many times he expressed to me admiration for that model of departing from the world willingly. This last year Swamiji told me several times that the astrologers had told him that the mahamaraka yoga of inevitable death was hanging over him, but that he simply "refused to die." Each time he said this, he said it with absolute determination. He would especially go into silence and meditation, using nari shodhana and other techniques to stay the call of Death, all so that he could see his projects through. Just before I left SRSG in mid-June, Swamiji again said to me that he hoped that he would be able to finish everything, then say goodbye and enter kaivalya forever. I cannot believe that even though he left quietly in the auspicious brahma muhurta he did not do so in keeping with his ambitions of a glorious and voluntary death.

At any rate, it is not for a person's death that we remember them, but for their life and the good they do for others. Swamiji's contributions to deepening humanity's understanding of yoga and meditation and their benefits will long be remembered. And I would not like to minimize the work that he did for international peace and finding ways of harmonizing different religious traditions through meditation. His sterling relations with the Keralan Christians and Sufi sheikhs are just two examples of the work he did in this regard.

And again, to all those who have been with him for more than forty years -- Swami Ritavan, Stoma Parker, Swami Radha, Joanne Sullivan and a host of others, including Maryon Maass, Silvia Barata, Caroline Hume, Caroline and Stephan Hodges, etc., as well as those like Suren, Mei Wan, Tejas and the rest of the residents of SRSG who have been with Swamiji and served him for so long -- I offer my heartfelt condolences.

May he live in immortality.

By the way, his absolute last instructions to me were to floss…
Swami Rama Sadhaka Grama Swami Veda Bharati

Prem Prakash said…
From everything I have heard, Swami was a yogi of considerable attainment, and a man of tremendous honesty and integrity. The world is a lesser place now the has has gone elsewhere.

Jagadanandaji, my compliments to you for forming and appreciating you friendship with Swami. Too many bhaktas allow their personal paradigm to interfere with their ability to form realistic, meaningful relationships.
Tuesday, 14 July, 2015

Anonymous said…
"I cannot believe that even though he left quietly in the auspicious brahma muhurta he did not do so in keeping with his ambitions of a glorious and voluntary death."