August 06, 2008
There are some verses that ring so sweetly, even when they are not immediately about a subject that one would call madhura. In the Bhagavat-sandarbha, sections 31-40 in most editions, but what will I think be one section (28) in this edition, contains a series of verses from Brahma-stava. These are not the most usually quoted verses from that chapter, and that is saying something because there are so many fine verses there. It is truly one of the top ten chapters of the Bhagavatam. (Which would make an interesting poll...)

Anyway, the main topic that Brahma is covering in these verses (10.14.11-22) is the nature of Krishna's form, the main point being that it is this very form of Krishna, the one who showed the universes in his mouth to Yashoda, who manifested as all the cowherd boys and calves, who is within the universe and without it. This is the most fantastic, audacious piece of theology that one could possibly imagine.

The concluding verse to the section is this one:

Therefore, this universe, which is completely unreal, like a dream, devoid of consciousness, and full of abundant and endless misery, which arises out of Your Maya potency, still appears to be real because it is situated in You, who are unlimited and possess a body that is eternal, full of joy and knowledge. (SB 10.14.22)

This is, contrary to what I said before, quoted fairly often throughout the Goswamis' writings, especially that bit nitya-sukha-bodha-tanāv anante. This is the power of the Bhagavatam, my friends. The combining of poetry with philosophy, with bhakti. The juxtaposition of language evocative of the advaya-tattva, the impermanence and misery of the material world (puru-duḥkha-duḥkham, a favorite kind of rhythmic trope, like punaḥ punaś carvita-carvaṇānām, tad eva ramyaṁ ruciraṁ navaṁ navam, etc., found throughout this glorious book), along with the characteristics of Brahman, but then delivering the unexpected siddhanta: it is a body that has these characteristics. And then the second unexpected siddhanta, that it is the relation to this transcendental body that makes this temporary world appear real, which means it cannot simply be called false.

All yoga philosophies, all Vedanta, place the subtle first, the gross later. Empiricism does the exact opposite. Thus Prabhupada expressed it succinctly: Life comes from life. But not just life comes from life, all forms have their basis in the original source: "Man is made in the image of God."

I remember when I was on my way to India in 2005, I was riding in the subway with a Jewish doctor who was telling me his atheistic doctrine, and as though he had just discovered it, proclaiming, "God was made in the image of man."

That is what we call putting the cart before the horse. The assumption is that man came before God, which is of course ridiculous, and pretty pompous, beside.

Spirituality is the procedure from the gross back to the subtle. Some of the clues of the subtle nature are found in the gross--that is why the Bhagavata says sad ivāvabhāti. And that is why yogis say, yad asti piṇḍe, tad asti brahmāṇḍe. Therefore, the concept of the personal God is not the grossest manifestation of childish spirituality (though it can be, when mistakenly conceived), but rather the subtlest understanding of the true origins of all forms, all consciousness, personality and, finally, love.

At the same time, Jiva manages to proclaim this doctrine while safeguarding the famous Hindu tolerance and acceptance of multiple paths and destinations. Nevertheless, it is hard not to feel a little twinge of caritas for those who reject the diamond-like joy of personal relationship with the Divine Person to sift through the sand pebbles of mukti, or the utter vapidity of nothingness. Worse yet, to do so with a feeling of pride in one's intellectual superiority--like David Hume, proclaiming his rational disbelief unto the bitter end. "There is no more chance that my consciousness will survive death than that this piece of coal will not turn to ash in the fire," he said as he tossed it into the brasier. Nirvana, it is called, the supreme happiness!

O Teacher of the World, now that I am standing in the ocean of nectarean joy that comes from a direct vision of you, the pleasures of merging into Brahman seem in comparison to be like the water in a cow's hoofprint. (Hari-bhakti-sudhodaya)

Sujitji took some photos of me speaking at Madhuban. I shaved my head--but it was not to blend into the Iskcon atmosphere. I was feeling itchy and am also "experimenting with my look," to use an expression that I taught in my English class the other day. But my first shock (shaving up for the first time in more than 20 years) was to see that I looked like quite a bit like Indradyumna Swami (with whom I took sannyas back in 1979). 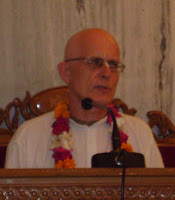 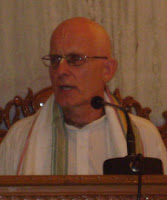 And Radha Govinda are very nice: 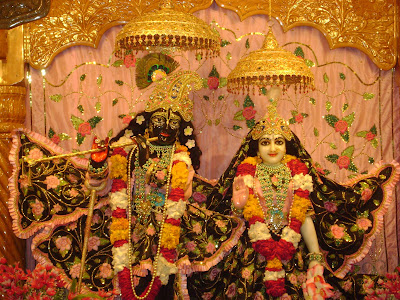 Jagadananda Das said…
This comment has been removed by the author.
Wednesday, 06 August, 2008

Anonymous said…
About the hair...