My son disappears while mountain biking 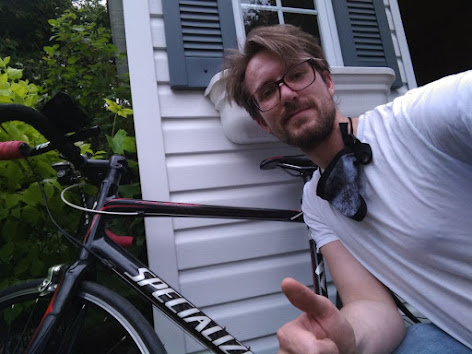 The entire Brzezinski and Campeano families have been shocked and devastated by the news that my son Pavel (30 years old) disappeared in a popular wilderness and mountain biking area near Quebec City, Vallée du Bras-nord. He went up last Sunday, the 15th, and went missing on the same day. We have no idea what happened to him.

He was a beautiful child, smart, talented, full of potential. He had growing pains, but was just coming through them all -- he finally got his computer science degree, got a good paying job he liked doing, had friends and a girlfriend. Life was looking up for him like never before. He had seemingly come through a dark zone and was opening up to a life of achievement. It is terrible not to know what happened to him. It is terrible to see it all come to such a sudden and meaningless end.

He was blessed in so many ways. From childhood he had been hearing the Holy Name. He had taken prasada and loved it. He was a lifelong vegetarian, and a great advertisement for vegetarianism: He was physically strong and brimming with good health. He had tremendous talent as a pianist and had received classical training in voice as well.

Under social pressure, he took the two Covid shots, against the will of his mother who felt that the vaccine would only diminish his natural resistance, which was strong due to his general good health. Pavel had been complaining of chest pains after the second shot and his mental attitude had been less positive afterwards. But on the day he left for Quebec, he was cheerful and enthusiastic about the trip and showed no negative mood at all.
The companions with whom he was mountain-biking also saw nothing in his attitude that differed from the customary. But at one point, Pavel said he wanted to go down a different trail and separated from the group. We don't know why he did that. He said he would meet up with the others for lunch at 2.30, but never showed up. His friends reported to the park rangers and the Sureté Québec (the provincial police force) and they soon found his bicycle, helmet and glasses on the trail, but without any sign of Pavel.

The search began and for five days they looked up and down the trails. There was no sign of his making an entry into the forest itself, but the cover is so thick at this time of the year that it is impossible not to get lost within only a few meters of the trail. For the same reason, the search parties did not go into the woods, but they saw no signs that Pavel had entered at some point himself.

They looked along the cliffs and in some caves, they look along the river at the bottom of the cliffs. They used dogs, helicopters, drones and hundreds of local volunteers, including Pavel's friends, some of whom stayed on. But after five days they said we cannot go on. They found no body, so we are left without closure.

Did he run off somewhere? Did he pull a disappearing act? Was he abducted? None of this makes any sense at all. Could he have had some psychotic or drug-induced episode? His friends say he did not take anything and that he was behaving completely normally.

His mother, Anne, is going with his cousin to see if there is anything that can be done. If nothing else, they will at least see where his last traces are to be found. She still hopes against hope. Pavel lived with his mother still and indeed he was everything to her in a way that even I cannot understand. I cannot imagine how disastrous all this is to her.

Pavel came into this world surrounded by love and he was loved throughout. It is not right that this lovely young man should be taken away from us prematurely, before all the powers within him could be expressed for the service of God and humanity.

Perhaps he will still be found or will show up again, but it is hard to hope in these circumstances. Wherever you are, Pavel, we are with you in spirit. Continue your journey to the Ultimate Good and we are with you. Our love and our fearlessness accompany you. May the grace of Sri Krishna always go with you.

O God of Destiny, you never show any mercy!
You bring embodied souls together through friendship and affection,
but before their desires are fulfilled, you separate them again.
Your game is like the meaningless actions of a child. (10.39.19)

At times like this, we devotees have no other recourse but the Bhagavad Gita and our other texts, which start from the reminder that we all die. We die, those we love die. There is no escape for anyone, so why lament? We trust in the will of the Lord. This temporary world is a vale of suffering and provides no shelter for anyone.
Naturally, at a time like this, I would like to be with Anne to help her get through this unimaginably difficult situation, but I have no money to travel, there are Covid restrictions on travel to Canada, and I am also facing a critical time in getting passport and visa renewed. But money is the main problem.
Autobiographical