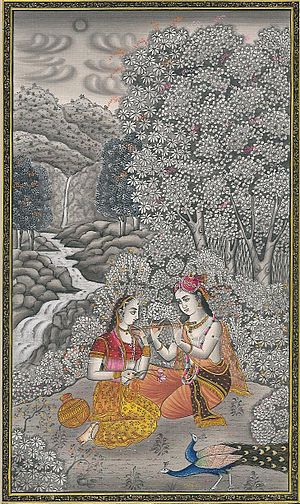 
॥११.८॥ श्रीपिङ्गला॥३१०-३११॥
[The pronoun amunā, “with Him,” is used for a person or object that is far away.] This indicates an intention to enjoy with the lover who is present in consciousness, but not personally present. Ātmanā [translated above as "with… my very Self" should be understood to mean] “through the mind,” i.e., that the manner of enjoyment is internal. The verse is to be understood in this way because on the path inspired by taste (ruci), internal worship through the function of the mind plays a dominant role. Furthermore, Piṅgalā had not yet attained a spiritual form as a sweetheart of Bhagavān, in which case it is generally appropriate to perform such service only through the mind. From this it is understood that it is forbidden to behave in such an impudent manner with the deity form of Bhagavān, even for practitioners such as Piṅgalā. The same principles apply in regard to other relationships with Bhagavān, such as that of being a parent.

After defining rāgānugā bhakti with an example and showing its superiority over vaidhī bhakti, Śrī Jīva Gosvāmī gives the manner of its execution. He says that mind plays the most important role in it. This is so because attachment is the characteristic of the mind.

It is seen that some devotees who practice the mood of a sweetheart although possessing a male body dress like a cowherd girl. Śrī Jīva does not approve of it. He says that the important thing is the inner feeling or temperament and not the external dress. An actor can also dress like a sweetheart of Kṛṣṇa but will not have the corresponding consciousness. The change is to be brought about within and not without.

Anuccheda 312
Rāgānugā Does Not Depend on Vedika Injunctions
312.1 Rāgānugā in other relations

We have thus discussed rāgānugā bhakti performed with the attitude of a consort of Bhagavān. This type of devotion is also seen in a woman called Kāmakalā [described in the Brahma-Vaivarta Purāṇa]. Similarly, rāgānugā bhakti performed with a taste for rāgātmikā devotion steeped in the mood of a servant or some other temperament can be seen in other places, as in these words of Śrī Prahlāda:


I am well-acquainted with the blessings desired by embodied beings. Therefore, I do not covet a long life, opulence, social status or sense pleasure, even those available to Brahmā, since all of these are vanquished by You in the form of invincible time. Please accept me into the association of Your servants. (SB 7.9.24)
यथा श्रीनारदपञ्चरात्रे—


When will such fortune be mine, O Lord of the Universe, when I will stand expectantly with a cāmara in hand, and You, seated with Goddess Lakṣmī, will tell me in a deep voice to "do it this way." (BRS 1.2.155)
यथा स्कान्दे सनत्कुमारप्रोक्तसंहितायां प्रभाकरराजोपाख्याने—


Although King Prabhākara was issueless, he did not desire a son, considering this to be the result of his past karma. He did not pray for a son even from Bhagavān Kṛṣṇa, who had appeared directly before him. He considered Bhagavān Kṛṣṇa, who is the eternal master of the universe, the Soul of everyone who is to be known by all the Upaniṣads, as his son, and made preparations to install Him duly in his kingdom.
अग्रे भगवद्दत्तवरश्च—"अहं ते भविता पुत्रः" इत्यादि।

Later on, Bhagavān offered him this boon: “I will become your son.”

In this verse the words “like a husband, son, friend or brother” are adjectives for Bhagavān Hari, who is to be meditated on in these different capacities by the devotees. The words “like a father or mother” are adjectives for the devotees, who meditate on themselves as parents of Bhagavān. In the compound mātṛ-vat, “like a mother,” the vati suffix (“like”) does not indicate that the devotee should meditate on him or herself as identical with Bhagavān's renowned mothers, but in the mood of following them. The same principle applies when adopting the attitude of a father or other relation. Otherwise, it would be a defect on the part of the devotees to imagine themselves as eternal associates of Bhagavān, similar to the fault of ahaṁgrahopāsanā, or worshiping oneself as Bhagavān.

“They meditate” (dhyāyanti) confirms the prominence of the mind's role on the path of rāgānugā, as pointed out earlier. The word “also” [added to "those who meditate," etc.] implies that if even such practitioners are to be respected, then what can be said of those who have attained perfection in those particular relations of love?

In the previous two anucchedas, rāgānugā bhakti in the temperament of a sweetheart was described. The same approach can also be applied in the temperaments of a servant, friend or parent by following in the footsteps of those eternal associates of Bhagavān who have those moods.

The verse Śrī Jīva Gosvāmī quotes from Nārāyaṇa-vyūha-stava has some lack of clarity that needs to be corrected. Taken literally it would mean "they meditate on Him as their husband, son, friend, brother, father or mother" (pati-putra-suhṛd-bhrātṛ-pitṛvan mātṛvat). Jīva Prabhu divides these relations in two different ways according to the referent. The words pati, putra, suhṛt and bhratṛ modify Bhagavān, while pitṛvat and matṛvat are descriptive of the devotee. He does this because it is not a custom in the Vaiṣṇava tradition to think of Bhagavān as one’s father or mother . Rāgānugā bhakti is performed to render service to Bhagavān in the specific temperament of a servant, friend, parent or sweetheart. To have the attitude of being His child does not give one the opportunity to serve Him. Rather one becomes an object of His service. Such a relation is tinged with awareness of Kṛṣṇa's majesty, therefore devotees aspiring for a relation with Him in Vraja are not keen for it .

vraja-sthānāṁ paraiśvarya-jñāna-śūnya-dhiyām api |
asty eva vallavādhīśa-putratvaiśvarya-vedanam ||
Those devotees living in Vraja are without any awareness of Kṛṣṇa's supreme majesty. The only majesty He has for them is that of being the son of the king of the cowherds, Nanda. (BRS 3.2.155 )
Śrī Jīva Gosvāmī also warns that one should not identify oneself directly with the eternal associates of Bhagavān such as Nanda or Yaśoda but rather consider oneself to be their assistant. Identifying as an eternal associate would bring the same defect as in ahaṅgrahopāsanā or identifying oneself with Bhagavān.