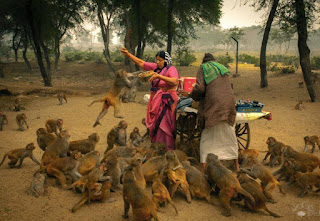 May I always render service
to the creatures of Vrindavan, moving or still.
Ah! What are the great gods like Brahma to me?
Those who are dear to the Moon of Braj
are far greater in glory than they!
Every one of them has a non-dual body
of condensed spiritual being and consciousness,
and their wonders have burst forth
to the far, far corners of the universe!
They are the root of the joy born of the joy
spoken of in the great Upanishads.

Prabodhananda here reminds us of the proper attitude to have while living in Vrindavan. We will see that this awareness of the divine character of all the residents of the Dham, including even the various nonhuman creatures that live there, is a recurring theme in the Mahimāmṛta.

In the Vrindavan of today, it is often difficult to maintain an attitude of love and service to the animal residents of the Dham, since there are problems associated with some of them like the monkeys, who are deprived of their natural habitat and can be quite threatening at times. Dogs are another beast that can be dangerous and out of control: there are far too many street dogs in the town. And the proper attitude to keep towards the cows is another problem that needs to be taken seriously in the current climate of frenzied development.

To a great extent, feeding these animals is not a service to them that is always favorable to the overall quality of life for either them or the humans who share this space with them. Proper waste management would go a long way to attenuating many of the problems associated with these creatures.

The proper attitude to all these urban wildlife is that they are greater than the gods like Brahma simply because they are dear to Krishna and living in his abode. But sevā to them has to be thought of in a way that improves the quality of life of every resident of the bhauma Vrindavan and supports its vocation as a place for the culture of Krishna consciousness.

The words bṛhad-upaniṣad-ānandajānanda-kandāḥ are probably a reference to Brihad Aranyaka Upanishad 3.9.28(7) (vijñānam ānandaṁ brahma) one of the mahā-vākyas where Shankara goes into a lengthy discussion of the word ānanda and how it is applicable to Brahman. What exactly is meant by "they are the roots of the joy born of the joy spoken of in the great Upanishads" is not immediately clear.

One way of understanding is that the joy spoken of in the Brihad Upanishad is Brahman, and the joy born of Brahman realization is rooted in the parikaras of the Divine Couple in Vrindavan. Brahman, we know, is sat, cit and ānanda, but Shankara rejects the idea that any of these are to be considered attributes of Brahman, since Brahman cannot have attributes. Shankara's reasoning is that attributes automatically indicate a duality of modifier and modified. So existence, consciousness and bliss in Brahman simply are the non-dual state of being.

But Shankara also recognizes in his commentary there that some scriptural sources indicate that joy does imply duality. For example, the Taittiriya Upanishad's famous raso vai saḥ, yaṁ hy evāyaṁ labdhvānandī bhavati: "Taste is certainly the Supreme, for by attaining it one becomes blissful."

Certainly the devotional conception requires that both the achievements of kaivalya, or being fully situated in one's individual svarūpa, must at the same time be combined with an awareness of the unity of all being. However, a sense of "otherness" must be present for love to exist, and true ānanda only exists in love. In fact, of the three aspects of Brahman, ānanda is the fulfillment and completion of both existence and consciousness. Already, consciousness implies an object, for consciousness without something to be conscious of is a non-sense. But a consciousness of the other accompanied by a sense of oneness with it, the combining of existence and consciousness, is only achieved in love.

So that which is spoken of as theory in the Upanishads becomes manifest as Reality in Vrindavan. Here the divide between the bhauma and nitya Vrindavan is not made clear, but the idea is that the eternal residents of the nitya Vrindavan, the perfect devotees and companions of the Lord, the servants and audience of the Divine Couple's lilas, render the Upanishadic concept of ānanda concrete. Jai Radhe.