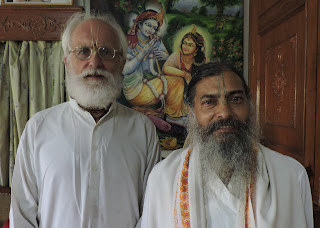 I am happy to announce that in Karttik, we will hold a one month seminar on Krishna Sandarbha at the Jiva Institute in Vrindavan.

Mahanta Satyanarayana Dasa Babaji Maharaj has dedicated his life to studying, translating and commenting on all the Sandarbhas and has formed a team to assist him in his efforts to bring the entire series to publication.

I am one of the editors on the project and have been making steady progress and am currently trying to push myself to complete my task before the beginning of Karttik Vrata. It is amazing that I have been involved since 2008 and we have only managed the Bhagavat and Paramatma Sandarbhas, but I am trying to build up a little more momentum. Babaji is a very patient man.

Whatever the case, I am convinced that that the combined efforts of everyone involved in this historical Jiva Institute Sandarbhas project will make this translation and commentary of Jiva Goswamipada's theological magnum opus the most authoritative version for a long time to come.

I have blogged previously about the kind of work I do with the Sandarbhas. I have been through this volume several times already, especially concentrating on making a correct text for the Grantha Mandir, but what I am doing now requires an even closer reading of the text, being careful that as far as possible the nuance and tone of the original is preserved.

I gave myself a deadline (October 23rd) to finish my part of the work, and then the plan was that Babaji and I would sit down together (as we did with the previous volumes), reading through the Sanskrit and translation together, making refinements in the translation, commenting and clarifying sticky points, raising philosophical questions and so on.

The seminar idea came up later when I suggested that we open up our sessions to other Vaishnavas and scholars who might be interested in having a crash course in the Sandarbhas. Sanskrit knowledge will not be required, since the translation is the main focus of attention, but it would definitely be of great help. Babaji and I greatly enjoyed reading through the entire Sanskrit text of the previous Sandarbhas together, which gave us a chance once again to relish Jiva Goswami's prose in a more concentrated way.

The Krishna Sandarbha seminar will start on October 24th. More details will be available later from the Jiva Institute website and we will post here as soon as the program is finalized. Babaji will also be holding a "Svadhyaya [Re]treat" from October 11-19 at Jiva, so this will follow after that. Those who can should try to attend both.

The Krishna Sandarbha is the fourth of the Sandarbhas. More information can easily be found on line as well as in this video. I also wrote about it briefly in this post, which includes a video link. Also see this: Vidyāvatāṁ bhāgavate parīkṣā.