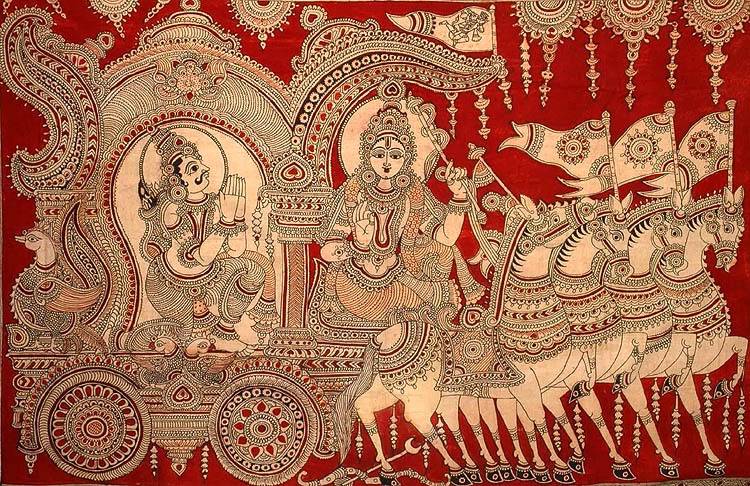 "I am situated in the being of the self, like a bee in the whorl of a lotus and there I reveal my divine essence and attributes, and with the shining lamp that in the form of this knowledge I destroy the darkness that is any contrary knowledge, which has arisen from timeless ignorance and one's absorption in the cycle of work and its reaction, and which takes the form of desiring anything other than me."

Although these four verses are being touted here as the essence of the Gita, it should also be noticed that they present some original features for the Gita. Words like bhāva, tuṣyanti ca ramanti ca, and prīti, which indicate love and joy, the parama-puruṣārtha. This concentration of words indicating affection. love and joy are nowhere else to be seen in the Gita. Generally speaking, the word bhakti, which is derived from the root bhaj, carries the sense of affection of a lower for a superior, such as a disciple for the guru, the wife for the husband, or the subject for a king, and so on.

In this case, it may be debated whether bhāva and prīti are outside the scope of this dāsya-bhakti, but certainly Vishwanath thinks they are, as he expressly introduces rāgānugā bhakti  to verse 9 on the basis of the word ramanti, which carries the hint of madhura-rasa in it. (tadaiva bhāvi-svīya-sādhya-daśām anusmṛtya ramanti ca manasā sva-prabhuṇā saha ramanti ceti rāgānugā bhaktir dyotitā). On the whole it is not so important, since the mechanics of  dāsya-rati will be incorporated into all the other rasas, including madhura.

The proper response of the superior to the inferior, on the other hand, is called vātsalya, which is characterize by compassion. The word compassion can have a fairly wide scope of meaning, and some may not see how parents, the classical āśrayas of vātsalya, are being "compassionate" to their child, but if we see it in the general category of benevolent action conducted by someone who is in a superior position of knowledge, etc., towards those who are dependent or suffering.

In this verse, for the first time in the Gita, a word that means compassion, anukampā. Words for compassion are indeed rare in the Gita, and generally using variants on the word prasāda. [In 11.44-45, Arjuna is fearful and asks for Krishna in the Universal Form to be pleased or have mercy by showing his human form. In 11.47 Krishna says he is pleased (prasanna) and does so. Then in 18.56, 58, 63, the word is used to indicate that Krishna's grace is the key to attaining the supreme destination, crossing over the material condition, and attaining peace. Arjuna says in 18.73 that his illusion has been dissipated, his memory revived by Krishna's grace (prasāda). And finally Sanjaya says that he has witnessed this conversation by Vyasa's grace in 18.75. The word kṛpā, which later is a favorite for compassion, is only used once in the Gita (2.1) in order to describe Arjuna's feelings for his kinsmen, etc., at the time he makes a decision not to fight.

So Krishna shows the path by which we can attain him if we are already engaged in the fundamental sādhanas of the madhyama-bhakta. This was stated in the previous verse. Now, in the second verse, it can be said that a higher prayojana is being shown. The path to prema begins with bhāva. The path to rasa begins with rati, i.e., sthāyi-bhāva. Krishna here says he is situated in the spiritual bhāva of the devotee, and it is from there that he shines this lamp of knowledge. Here the shining of the lamp of knowledge means prema-bhakti, the state of rasa, wherein Krishna and his devotee are united in the inseparability of love.

That is only attainable by grace, and there is no more sādhanā left for them except to await the Lord's grace, the way the chatak bird awaits the cloud in order to get a drop of water, and will go nowhere else, so it is with the surrendered devotee. The intelligence to find Krishna and the grace of Krishna, which is prema-bhakti.

"The Yogi who practices amanaska becomes a jivanmukta"

See page 13 of "The Amanaska Yoga" translated by Jason Birch.