February 21, 2015
There are six kinds of useless servants or disciples:

(1) One is like a bee (ali) that wanders from flower to flower, i.e., is not loyal.
(2) Another is like an arrow (bāṇa), who wounds his master.
(3) Another is the procrastinator (jyotiṣaka), always waiting for the right alignment of planets before he acts.
(4) The fourth is stabdhībhūta, i.e., lazy, bewildered, dull and inactive.
(5) The fifth (kimekakaḥ) is someone who lacks initiative or courage to act alone, saying, "I can't do this by myself."
(6) The last is one who passes the buck (preṣita-preṣaka), shifting responsibility onto others rather than taking it himself.

Fifteen years ago I posted this verse on the Indology list because I had some difficulty with a few of the words. Who knows where I found it, probably in a text related to Bhakti Promode Puri Maharaj, as I was working for Mandala at the time. I could not find the original source reference. Someone doing a google search found my original post and inquired about it so I thought I would post it here. 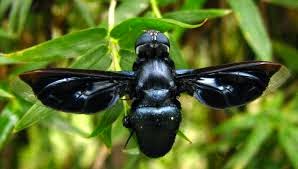 A bee usually is seen positively because of its pleasant buzzing sound and its associations with flowers and honey, what to speak of the western image of a "busy bee." Even in relation to gurus, there is a statement in the Bhagavatam that the example of the bee going from flower to flower to collect honey is a good thing.

Just as a bee goes from flower to flower in its greed for honey, so a student goes from one preceptor to another in search of knowledge.

.Although the bee is often given positive associations in Sanskrit literature, that is not always the case. For instance, see this verse from Gopālacampū:

"The bumblebee is known to be a fool or a savage,
and the cuckoo, one maintained by others, a lowly slave.
If these two are the harbingers of the sweet season,
then what further knavishness can we expect from it?"

In this case, the explanation is made explicit Somadeva´s Kathā-sarit-sāgara, (10.5.118)

Servants [leave] a master who has no means of livelihood,

bees [leave] a flowerless tree, and geese leave a lake without water even after a long habitation.Of course, the bee's proclivity for abandoning a person is stated by the gopis in an accusatory tone when speaking of Krishna in BhP 10.47:

One sees that friendship usually lasts only as long as some purpose is served by it. So it is with men after they have enjoyed a woman, as with bees who leave the flower once they have tasted its honey. (10.47.6)

According to Jiva Goswami, one is loyal to the diksha guru, but continues to associate with other advanced Vaishnavas and siksha gurus if they are in the same mood as the guru. Here, the problem is those who are never satisfied and abandon the guru as soon as they have "extracted" whatever they wanted from him.

The term bāṇa was a bit problematic, as I can't recall having seen that example, but it would appear to intend the pain that a disciple who is disobedient or arrogant gives the guru. Or, one who finds fault with the guru.

The other terms are rather self-explanatory, even though original, and I will not bother with excoriations of those who have not learned the art of service. Detailed lessons and examples can be left for others. All the rasas of love have service as their central feature, so one should learn to avoid these defects of dasya-rasa.

When the Kanwal (Sahasrara) of a yogi is open in bloom, the inner-sound (anahata/ nada)of the large black Bee (bhramara) is heard.
Tuesday, 21 April, 2015