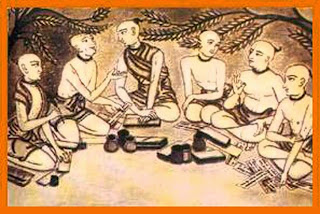 I was recently added to a group on Facebook called Devotional Poetry, where a few devotees have been sharing their compositions and their love of language (English only, of course).

I am not a compulsive poet, nor a regular practitioner of the craft. If I am a poet at all, it is more of an impulsive one, who occasionally is driven by some inspiration or emotional turbulence to express myself. So I haven't written a great deal, and when I do, it admittedly tends to the maudlin because of the excessive charge of immediate, unprocessed feelings.

But without the charge of personal feeling, if a poem is only repetition of another's thoughts, or didactic/intellectual alone, then it loses its edge or capacity to produce rasa. In these cases, what we get is bhāva, not rasa.

The thing about writing, poetry or any kind of literature or artistic production, according to rasa theory, is that it takes emotions (bhāva) out of the realm of the purely personal. Personal experience is what makes rasa possible, but when it is translated into words, it becomes universal, separate from and transcendental to the purely individual. That then becomes rasa.

When you manage to tie that in with God, especially in the form of Radha and Krishna, it becomes bhakti-rasa. God is the "universal personal."

Only an artist can be a true Hare Krishna, a rasika, a connoisseur of rasa. That is why this Facebook group interests me. I think we can better understand the level of devotional experience as it manifests in the followers of the Hare Krishna movement by studying devotees' capacity to produce rasa and at what level.

Our main avenue of understanding of bhakti comes through Rupa Goswami, who is the rasika-bhakta par excellence. So to be a rūpānuga really means to be a poet. But being a poet here, now, today cannot be exactly the same as being a poet in the 16th century. That experience has to be transposed into modern experience in order to produce rasa in the modern audience. And the modern audience also needs to be trained -- as it has in every epoque -- in order to develop the capacity to experience the rasa that is being shared.

That is why rational or historical understanding on the one hand, imitation on the other, do not produce rasa, at least not the higher levels of rasa to which Rupa Goswami was pointing.

The theory is there and correct, but the actual production of bhakti-rasa through poetry is a mystery that only a poet, with the help of the rasika audience, can penetrate.