June 04, 2008
After many delays, I finally got to talk to Shrivatsa Goswami today and I am able to report some good news. It looks like the Grantha Mandir is going to get sponsoring directly from the Indira Gandhi National Center for the Arts. Through Shrivatsa, they have already been mirroring some of our texts, but not keeping up very well. This means that we will probably be able to hire a couple of typists here and in Rishikesh and also find someone who can learn the database program that Madhavananda developed for the site. Madhavananda will be coming to Rishikesh in July and I hope that we can make good progress on this and other counts while he is there. 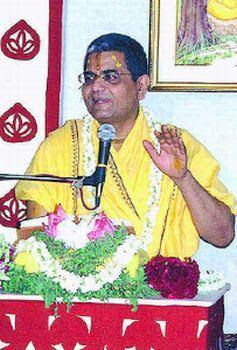 Shrivatsa has been working with IGNCA for a number of years and has published 10 books over that time through them. One of them is, of course, Haberman's fine translation of the Bhakti-rasamrita-sindhu.

Otherwise, we covered a number of other topics. Shrivatsa was in form with his own historical obsession, the politics of 16th century Chaitanya Vaishnavism. He does not like "Gaudiya" so much as he says it is a definition that fails both the "vyapti" and "ativyapti" tests. In other words, not everyone who is a Chaitanya Vaishnava is from Bengal, and not everyone from Bengal is a Chaitanya Vaishnava. So it seems that Chaitanya Vaishnava is indeed a better term. His argument was that even Rupa and Sanatan were really South Indians, so Jiva really counts as a Karnata as well, and Gopala Bhatta was definitely from the South. Indeed, Shrivatsa thinks that Mahaprabhu "kidnapped" him from the Sriranga priests, which was the center of Vaishnava power in India then and perhaps even now. Since Gopala Bhatta's input in the Sandarbhas, as clearly as it is stated by Jiva, and the Hari-bhakti-vilasa, as clearly as it is stated by Sanatana, somehow shows that there was some cliquishness going on amongst the Bengali Vaishnavas in the 16th century that minimized his role and contribution. Shrivatsa used the term "factory" to describe the way that the Goswamis produced their literature, and that there was input from most if not all of them in many of the works.

I wanted to write a bit about some of the other classes I have heard at Iskcon, and also do a portrait of Kirnasa, who is hanging around the Iskcon quarter these days and with whom I have been talking a bit. Premadas has been in great form the last few days, asha-bandha and samutkantha were very moving. My dear readers, you deserve to get a portion of that nectar.

I should also have mentioned that Satya Narayan is also interested in helping the project by providing typists, so I think we can look for a bit of a surge in GGM activity in the coming year.

Anonymous said…
Great news! Keep me up to date as I'm running the admin part of the server GGM is sitting on (Madhava will have full access, of course)
Wednesday, 04 June, 2008

Anonymous said…
Congratulations, Jagat! This sounds like good news indeed, and I am very happy on your behalf.

Two years back the heat was on me for having a sahajiya participate in the publication of a Vaishnava text.

And now it's all about a sahajiya taking help from a sunyavadi to develop a repository of Vaisnava texts.

Has anyone apprised B.G. Narasingha of the details of the ongoing operation? I think he deserves a phone call!
Wednesday, 11 June, 2008