January 06, 2008
This morning we had a lengthened meditation session, 3 1/2 hours at one shot, with Swami Veda there for about half the time. Swami Veda said it was a penance for the Gurukula students for not learning their hatha yoga lessons well enough, or something like that. It was voluntary for the rest of us. I was fairly concentrated for about 2 1/2 hours, then I switched over to Harinam, which does not require quite the same kind of concentration. You can just scream out the Names in your mind and forget the rest.

I may have mentioned that there is one young man here, Suresh, who was formerly with Iskcon in Bombay. We talked a bit about the way japa is done in Iskcon and whether it was effective. My personal feeling is that no doubt the Holy Name has a beneficial effect, but Jiva Goswami says that the diksha mantras are there because we need to correct bad samskaras. To me, that means that the mantras are about a special kind of concentration that the facility of Harinam does not need, at least not in the beginning. Of course, it has always been my contention (following Rupa Goswami) that anAsaGga-bhajana, or bhajan done without mindfulness, will be fruitless. This is where the yoga in bhakti-yoga comes in.

I get the impression that many, even the most conscientious, are sloppy about japa, in the sense that they don't take the trouble to apply basic meditation principles that aid concentration. Most cannot sit for long, don't keep their backs straight, cannot remain still. In a pretense at an effort to concentrate, they shake their heads and bodies, or walk back and forth, often violently. The Yoga-sutra says that moving around in meditation is an anartha (1.31 angamejayatva, one of the elements of vikshepa). If it were a prema-vikara, that would be another thing, but it mostly isn't. I asked Suresh whether it was better in Radhanath's ashram, which has a reputation for dynamism and seriousness. He said, it's worse, they shake their heads like crazy because that's what Radhanath does.

A propos, it is hard not to be taken for an Iskcon devotee in India. After all, if you put tilak on and carry a beadbag (and I may be the only person in Rishikesh who wears a dhoti with a pleat or kach up the back), people automatically think you are from Iskcon. On the other hand, the kids here all say "hi" and "bye" to white skinned people, however they are dressed, and not "Hare Krishna" as in Vrindavan. (What a tragedy that Iskcon is undermining the tradition of saying "Jai Radhe!" there.) At any rate, I am rather used to this, for as a Canadian I have a bit of training in distinguishing myself from Americans, which is a similar art. Nevertheless, in the context here, where perhaps Swami Veda is looking to find some of Iskcon's secrets of success, I have found myself speaking admiringly of Prabhupada and trying to analyze some of those secrets. 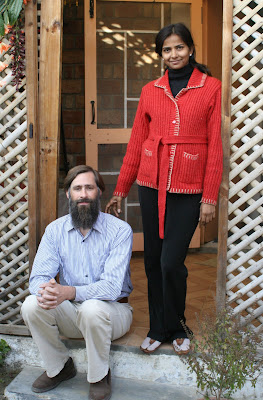 To summarize briefly, Nilakanth, an American who is a longstanding resident (he is my neighbor) here was showing a few reservations about the progress of the Gurukula experiment. It may even be the same kinds of frustrations that the American devotees in Mayapur used to have with the Indians who joined. They did not seem to have the same kind of selfless and self-motivated commitment to the cause that we had. We perceived them as being more "along for the ride" than as fully committed participants ready to show the kind of leadership that we hoped from them. There were a few exceptions, but that was the overall impression and I think that this is what I was hearing here also.

The same thing was expressed about employees. Firing does not seem to be a culturally accepted option. My analysis was that employees in India, at least in this type of setting, consider themselves "clients" of the employer, whom they see as a "patron," much in the way a peasant would see himself in relation to a zamindar. This means that the relationship is rarely related to performance, nor can it really be terminated because of performance-related issues. Bhavananda used to steamroller through these unspoken traditions, and ultimately the fear he generated great effectiveness. Swami Veda, on the other hand, may have adopted the patron role, as many others like him do. Whether it is necessarily bad is another matter.

Swami Veda believes that the Himalayan yoga tradition preserved by Swami Rama is the genuine yoga tradition--one that focuses on deep mindfulness and meditation. He also wants to see this tradition taught widely for the greater good of all humanity. Ergo, the Gurukula, to train up teachers and indeed missionaries for the cause. I feel that it is an experiment in its beginning stages and it is too early to start wringing hands about results. The only way to really expose these students to the kinds of occidental character traits that are considered desirable is to make them spend time there.

To come back to my American friend, who had spent time in Bangalore and whose wife's family contains numerous ardent supporters of Iskcon, he feels that Iskcon is being impressively successful in some places in India: their temples are opulent, clean and quite well managed, with beautiful deities, and they impress a lot of people, and for good reason. He would like to know some of their secrets.

I walked into town in the afternoon as there are no classes on Sunday. I went a little further across town to the Lakshman Jhula area because I wanted to see the Krishna temple, called Madhuban. It is run by a Kirtanananda disciple of Indian origin, Bhakti Yoga Swami. And lo and behold, there was a banner crossing the street saying that Kirtanananda Swami has come to visit and is here right now. I toyed with the idea of going in to say hi, but nixed it. Nevertheless, I am wondering if there is some meaning to the coincidence, as I saw Kirtananda in New York in August. The temple is a Krishna Balaram mandir in miniature (minus the Russians), by which I mean it has the guest house, shops and stalls, etc., that commercial kind of mood. But it also has many of the above-mentioned positive features also.

On the whole, I don't care much for Rishikesh town. There is not nearly the kind of vibe you get in Vrindavan, where nearly everyone seems to be a devotee, even the shopkeepers and rickshaw wallas. Rishikesh is just your typical Indian town with tempos and trucks trying to run you down left and right. Garbage literally everywhere. I even went down to the Ganges in one spot, down a fairly long steep staircase that leads to a small Shiva temple and a bathing ghat at the bottom. The slope is covered with trees and the view across the Ganges is magnificent. Could have been a beautiful spot, but all the way down the hill on both sides of the stairs the slope is being used as a dumping ground. Unbelievable. There are billboards here and there saying to keep the Ganges clean, but no one gives a damn. It is pretty depressing. Nilakanth says that there is absolutely no public discourse on the subject--no public speeches, no outcry, no newspaper articles.

Last night also there was loud music blaring all night right nearby. It was pretty exceptional, and I thought that we were actually immune from that here. Far enough from the madding crowd in this town dedicated to tapasya and meditation. Sounded like they were doing karaoke. Kept me awake half the night. When I got up I thought I had slept in, my sleep had been so fitful. Ah well. Despite all that, I have no complaints, my friends.
Autobiographical Kirtanananda Madhuban Rishikesh Rupa Goswami

Anonymous said…
Keep on updating us about your findings. I especially find the little details interesting/amusing reading.
Tuesday, 08 January, 2008

Anonymous said…
This information about keeping still when doing japa etc. is also backed up by Sri Baladev Vidyabhushan in Govinda-bhashya 4.1.7-10.
Wednesday, 09 January, 2008

Anonymous said…
Try Haridwar for a more 'Vrindavan' like atmosphere - narrow streets with paving stones. I was last there over 20 years ago and it's probably become very touristic, but Rishikesh sounds the (dull) same so perhaps Haridwar is too. But which side of the Ganga are you on? Have you been to Svarga-ashram side? That's the more 'spiritual' part. (With the Maharishi's place at the far end, where the Beatles stayed).

There used to be a quaint old place near Har-ki-pauri ghat in Haridwar which served the most delicious lassis.

Kirtananda is visiting? How odd. But then they immersed Jerry Garcia's ashes there somewhere too. Maybe Kirtananda has some 1960's attachments to the place (like me).